ECHO, a Council of Youth Activists With HIV, Launches on World AIDS Day

Founded by Advocates for Youth, the council aims to end HIV stigma and decriminalize HIV. [VIDEO]

World AIDS Day, December 1, will mark the launch of a national council of youth activists who are living with HIV. Known as ECHO (Engaging Communities around HIV Organizing), the council will focus on decriminalizing HIV and eradicating stigma, according to a press release by Advocates for Youth, the organization that founded ECHO, trained its members and supports the sexual health and rights of young people.

The launch of ECHO coincides not only with the 30th anniversary of World AIDS Day but also with Advocates for Youth’s new YouTube series in partnership with MAC AIDS Fund, titled Kikis with Louie. It’s a series of honest conversations about topics that queer youths face; you can watch the first video below.

ECHO consists of 10 youth activists who will organize online and in their communities as they get needed health information to other young people. Specifically, the council members will use storytelling, media outreach and the social media campaign #MyStoryOutLoud to raise awareness about HIV-related issues as well as racism, transphobia and homophobia.

“I never thought that I would be doing intentional work around HIV awareness until I was diagnosed as positive in April 2018,” said Toraje Heyward, an ECHO council member from Georgia, in the press release. “Raising awareness surrounding HIV stigma, encouraging others to get tested and having conversations around healthy sex practices are ways that I combat the status quo every day.”

“The current administration is causing great harm with funding cuts for HIV programs and doubling down on ineffective abstinence-only programs, which spread ignorance and stigma,” added Debra Hauser, president of Advocates for Youth. “Young people won’t allow it. They’re stepping up and leading the movement to end HIV stigma.” 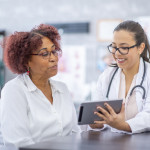