When Charles Mattocks, a.k.a. “The Poor Chef,” learned he had type 2 diabetes, he altered his diet and lifestyle. Now, he’s taking those lessons on the road. 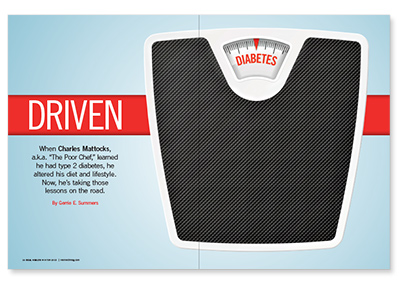 He’d been traveling the country teaching people how to “eat cheap but eat well.” Then, during a break, Charles Mattocks noticed that for a few days, his trips to the bathroom were becoming more frequent than usual. “I didn’t know what was going on,” he recalls. When Mattocks paid a visit to his doctor, he thought he’d just be given antibiotics and everything would be fine. Instead, he learned he had type 2 diabetes.

“It’s interesting,” Mattocks says. “I was pushing health and wellness and was diagnosed with diabetes when I was trying to be a vision of health. It was very shocking.”

Mattocks didn’t think diabetes ran in his family. (He later learned that an aunt had the disease.) He regularly worked out, but now realizes that he needed to “lose about 15 pounds and slim down instead of carrying that bulky weight.” Mattocks admits his diet wasn’t the best. In addition, he’d tax his health by staying up late working long hours. “Stress is also a contributing factor in type 2 diabetes,” he says. “And, usually, when you work long hours you’re going to find something [unhealthy] to snack on about 12  o’clock at night.”

Type 2 diabetes is the most common form of diabetes. People who have this chronic condition are unable to either properly use or produce insulin, a hormone made by the pancreas that allows glucose—a kind of sugar in the bloodstream—to enter our cells and be used as fuel. When glucose can’t make its way into the body’s cells, it accumulates in the bloodstream (a condition called hyperglycemia) where it can cause serious health problems.

“We tend to see this happen as people gain weight and get older,” says Rita Louard, MD, an endocrinologist and associate professor of clinical medicine at the Albert Einstein College of Medicine in New York City. “People who develop type 2 diabetes lose the ability to keep up with their body’s demand for insulin. Their beta cells in the pancreas are just not making enough insulin to keep blood sugar in a good range. They develop diabetes because of this.”

The big problem is, the longer you carry excess weight the more you increase your risk of diabetes. According to a study conducted by the University of Michigan, individuals who are excessively overweight earlier in life might be more predisposed to diabetes than people who maintain the same weight later in life. What’s more, findings showed that blacks and Latinos had a higher risk of developing diabetes compared with white individuals if they carried the same amount of excess weight over time.

It’s also worth noting that individuals with low-birth weight and a thin body shape aren’t protected from diabetes. “If you’re genetically predisposed to diabetes, even small amounts of weight gain can put you at risk and increase your chances of developing the condition,” Louard explains.

When Mattocks was diagnosed with diabetes, he didn’t know what the disease was. “The doctor suggested putting me on medication, but I didn’t go with that scenario,” Mattocks says. “I didn’t even know what my numbers were or what they meant. All I knew was that there had to be another option and I was going to figure out that option.”

Health professionals recommend that people regularly get screened for type 2 diabetes. Why? Because, Louard says, a number of people in the population have these risk factors for diabetes: family history, they’re overweight, they have hypertension, or a history of gestational diabetes.  “All of these factors predispose people to developing diabetes,” Louard says. “But the earlier we can get patients into treatment the better. The treatments are effective, and they can get your blood sugar levels in a good range. Plus, treatment decreases your risk for other complications.”

As Mattocks learned, educating yourself about diabetes is key. Once he received the diagnosis, “I went home, went online and, literally, just started reading everything that I could,” he says.

But even before he did that, Mattocks knew what he needed to do right away. “No. 1, I needed to lose about 15 pounds,” he says. “No. 2, I needed to change the way I exercised. I had to start doing some running, jogging and walking, instead of just lifting weights.” Mattocks also changed his diet in addition to making these lifestyle changes.

When patients are diagnosed with diabetes, Louard explains, doctors suggest lifestyle changes so if they’re overweight people will lose pounds and begin to exercise. “Weight loss and exercise are key components to the management of diabetes, particularly type 2,” she stresses.

Still, meal planning, weight loss and exercise aren’t always enough to bring a patient’s blood glucose levels down to a normal range. That’s when doctors may turn to drug treatments. “We have an array of medications that can work with diet and exercise to get patients’ blood sugar into a target range,” Louard explains.

Currently, doctors powwow with their patients before they decide what combination of meds might work best to meet this goal. Deciding on the right treatment drugs is crucial because some meds that control blood sugar may also cause weight gain. Other drugs control blood sugar and can allow patients to lose weight. “Obviously, if we have the ability, we’d like to choose the ones that cause the least weight gain,” Louard says. “But there is no perfect pill. If patients can keep the blood sugar levels down through diet and exercise, that’s ideal, but it’s also difficult to do and takes discipline.”

Mattocks confesses that his initial downfall—what got him in trouble in the first place—was a lack of discipline in his health habits. “I was trying to use healthier ingredients in my meals, yes,” he says. “But was I living a healthy lifestyle? No.”

Shortly after his diagnosis, this changed. Mattocks became a diabetes advocate. Recently, he began crisscrossing the country in an RV to educate people about the disease and inspire them to get tested early. The mobile health education event is called the “Diabetic You and Heal Together Tour.” Mattocks also created an informational website called TheDiabeticYou.com, and he’s working on a documentary of the same name. And he launched a 30-minute weekly radio show and magazine, both called Reversed, that offer health and exercise tips and advice about diabetes from doctors and specialists. In addition, Mattocks is working on a cookbook with the American Diabetes Association.

Like Mattocks, Louard prefers to battle the disease with healthy eating and physical activities that stop diabetes before it even has a chance to begin. “Reducing stress and sleep deprivation can also help you lose weight or manage anything in your life,” she adds. “I think that we can all do things to help improve our health, and a lot of them don’t have to be taking a pill or a combination of drugs.”

Also, like Mattocks, Louard stresses the value of moderate exercise each day, or “on most days of the week.” This means a 30-minute walk each day, five days a week can translate into “a strong mechanism for preventing diabetes,” she says.

When healthy behaviors become second nature, Louard believes, we will see “a big difference in public health in the United States.”

And as Mattocks’s RV eats up the miles, this “poor chef” couldn’t agree more.