A Taste for Health

People with type 2 diabetes can actually help reverse the disease by eating well. 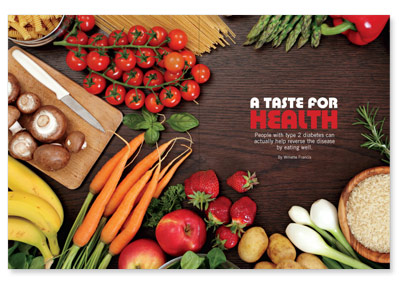 Now accounting for more than 90 percent of the nearly 26 million diabetes cases in the United States, type 2 diabetes is the seventh leading cause of death in this country. But the good news is type 2 diabetes can be prevented or delayed—even in people who are at a high risk of the condition. What’s more, new studies are showing that those already diagnosed with the disease can reverse the illness.

“Typically, people who have type 2 diabetes are overweight and inactive,” says Constance Brown-Riggs, author of The African American Guide to Living Well with Diabetes and a spokesperson for the Academy of Nutrition and Dietetics. “Two of the most important lifestyle changes people can make are to lose weight and get physically active. Weight loss is one of the best ways to manage diabetes, and losing as little as 10 to 15 pounds can improve blood glucose levels, decrease insulin resistance and possibly reduce the amount of diabetes medicine needed to control blood glucose levels.”

Briefly, diabetes occurs when blood glucose levels are above normal. The food we eat is turned into glucose, or sugar, for our bodies to use for energy. The pancreas, an organ near the abdomen and stomach, makes insulin, a hormone that regulates blood sugar levels and helps transport glucose into the cells of our bodies.

Essentially, the two main types of diabetes are type 1 and type 2. In type 1 diabetes, the immune system attacks and destroys insulin-producing cells. This is thought to be caused by a combination of genetic and environmental factors. Type 2 diabetes usually begins as insulin resistance, a disorder in which the cells do not use insulin properly. As the need for insulin rises, the pancreas gradually loses its ability to produce the hormone. Put even simpler, when you have diabetes, the body either doesn’t make enough insulin or can’t use its own supply of the hormone as well as it should. This causes sugar to build up in the blood, which can lead to serious health complications.

To study whether people with type 2 diabetes can reverse the illness, researchers placed 11 type 2 diabetics on a calorie-restricted liquid diet supplemented with three portions of non-starchy veggies and calorie-free beverages each day for eight weeks. (The people with type 2 diabetes were compared with a control group who didn’t have the disease.) Scientists evaluated the groups and measured—using magnetic resonance imaging (MRI)—blood sugar and insulin responses, cholesterol levels and fat in each person’s pancreas before the dietary changes and then after weeks one, four and eight.

Researchers found that during the study, in people with type 2 diabetes, the pancreatic beta cells, which produce insulin, began to function better—in fact, at nearly normal levels—while fat in the pancreas and liver decreased. After the eight-week change in diet, all evidence of diabetes was gone from the participants.

In essence, what the study showed was this: Eating a plant-based, low-calorie low-glycemic diet (meaning, in part, consuming only certain types of carbohydrates to help regulate blood sugar levels) reversed most diabetes symptoms in seven days, and it eliminated all signs of the condition in eight weeks. But while these study participants saw drastic results and were able to reverse their diabetes in a short period of time, Brown-Riggs says that the degree a person is able to reverse diabetes depends on many factors in addition to diet.

What’s also necessary with this type of diet is an increase in physical activity to help shed weight. “I tell my patients to think of exercise as medicine,” Brown-Riggs says. “Physical activity improves the body’s ability to use insulin, which might mean a decrease in the amount of medication they need.”

Indeed, when the right foods are added into the exercise equation, it can have a dramatic, domino effect on type 2 diabetes. That’s because the proper diet can improve blood sugar levels, decrease insulin resistance, and lower both high blood pressure and cholesterol levels. “What this means is it’s important to eat a more traditional diet that is based on whole, fresh fruits and vegetables, especially leafy greens, yams and sweet potatoes; beans of all kinds; nuts and seeds; whole grains; healthy oils such as olive or canola; fish; poultry; and minimal amounts of red meat,” Brown-Riggs says.

But it’s important to also control portions of good-for-you foods. For example, stick to three to four servings of fruit each day because these natural treats contain more calories. In addition, people who eat plenty of calcium-rich foods have an easier time losing weight and are less likely to become insulin resistant. And don’t forget the cinnamon. Studies suggest that about 3 grams (about half a teaspoon) of this sweet-smelling spice sprinkled on food can lower blood sugar by helping the body use insulin more efficiently, so more glucose can enter cells.

In her book, Brown-Riggs discusses how African Americans can manage diabetes with sound nutrition. Specifically, she focuses on different types of diets, including “the healthy ones that work, the alternative ones that may have some benefits, and the fad diets that may do more harm than good,” she says.

Indeed, diabetes is a serious and rapidly growing problem for African Americans. In 2010, nearly 5.6 million African Americans had diabetes. About 2 million of them were undiagnosed and likely beginning to suffer from common complications of the illness, such as eye, kidney and heart damage. What’s more, compared with whites, African Americans also have at least twice the risk of amputations, renal failure and death as a result of diabetes.

Diabetes is also beginning to affect school-age children. According to the Institute for Alternative Futures, 40 percent of African-American boys and 49 percent of girls will develop diabetes during their lifetimes, which can lead to severe diabetes complications and reduce their life spans by four to 23 years. Also, the forecast shows an uptick in the number of blacks with prediabetes, from 10.4 million in 2010 to 12.6 million in 2025. In prediabetes, the blood sugar level is higher than normal but not yet in the range for diabetes.

While these statistics are shocking, many scientific studies show that the simple lifestyle changes Brown-Riggs stresses can often prevent prediabetes or significantly delay its onset.

In addition, diet and lifestyle changes can also reduce high blood pressure and lower cholesterol and triglyceride levels in the body.

In general, for anyone who has type 2 diabetes and wants to better manage the condition with diet, Brown-Riggs’ suggestions are essentially common-sense solutions to the problem. She recommends that people living with diabetes control the ABCs of the disease, namely their blood glucose (measured by the hemoglobin A1c test), blood pressure and cholesterol levels, which can all be done with the proper diet and exercise.

Even though diabetes is more closely associated with what we eat than many other diseases, people living with type 2 diabetes don’t have to sacrifice the foods they love, and that includes dessert as Brown-Riggs  notes in her book.

“Don’t let diabetes take the sweetness out of life. I mean that both literally and figuratively,” she says. “Small amounts of sweets can be included in a healthy diabetes diet.You can pretty much eat what you want. It’s all in how you do it.”