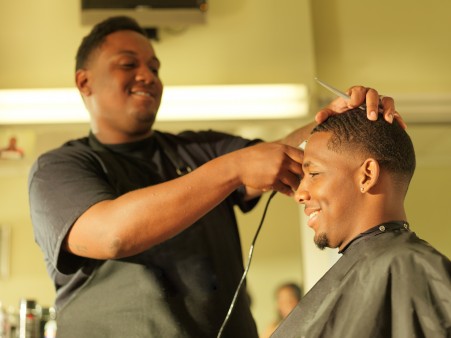 Cutting Heads and High Blood Pressure at the Barbershop

For African-American men looking to get a haircut, barbershops may one day also help lower their blood pressure.

Many men go to barbershops for haircuts and to shoot the breeze with their buddies. But these establishments may also one day play a role in helping reduce high blood pressure in Black men, a population at high risk of death from uncontrolled hypertension, suggest new findings published in The New England Journal of Medicine, reports EurekAlert!

For the study, researchers from the Smidt Heart Institute at Cedars-Sinai recruited 319 African-American men from 52 barbershops in the Los Angeles area for an intervention program aimed at lowering blood pressure. All participants suffered from hypertension, meaning their systolic blood pressure numbers were 140 mm Hg or higher. (Systolic pressure is the top number in a blood pressure reading.)

Investigators randomly assigned participants to two groups. Men in one group were encouraged by their barbers to meet with specially trained pharmacists who visited the barbershop each month. These health professionals prescribed blood pressure medication, monitored blood tests and sent progress notes to each man’s primary care doctor.

The barbers of the men in the second group recommended that their clients follow up with their regular physicians for treatment as well as make changes to their lifestyle, including increasing exercise and lowering salt intake.

The men who worked with their barber and a pharmacist saw their systolic blood pressure drop from 153 mmHg at baseline to 126 mmHg. In addition, their diastolic BP—the second or bottom number—also dropped by 18 mmHg. (Any measurement below 130/80 mm Hg is considered normal.) After six months, two thirds of the individuals in this group had lowered their blood pressure to a healthy level.

In addition, researchers noted that participants who met only with their barber registered a decrease in systolic blood pressure from 155 mmHg at baseline to 145 mmHg after six months. At six months, 11.7 percent brought their blood pressure down into the healthy range.

“When we provide convenient and rigorous medical care to African-American men by coming to them—in this case having pharmacists deliver that care in barbershops—blood pressure can be controlled and lives can be saved,” said Ronald G. Victor, MD, associate director of the Smidt Heart Institute and the study’s lead author. “High blood pressure disproportionately affects the African-American community, and we must find new ways to reach out so we can prevent strokes, heart attacks, heart failure and early deaths.”