Connect and Inspire Black Gay Men? There’s an App for That: THRIVE 365

The Atlanta-based HIV service provider THRIVE SS launches an app for same-gender-loving men of color, regardless of status.

Larry Walker remembers waking up one morning a few years back and logging into Facebook to connect with THRIVE SS, a support group for African-American gay men living with HIV, only to be confronted with random news items about the killing of yet another Black man. “Our members were being triggered and traumatized just trying to get to a space of support,” he realized. And after a mysterious Facebook glitch purged most of THRIVE SS’s members—“We went from 1,000 to 13 and had to rebuild!”—Walker and his fellow members knew they had to create their own network.

THRIVE SS was officially born in 2015, when it became an incorporated nonprofit thanks to funding from a community member who saw value in their online forum. The name stands for Transforming HIV Resentments Into Victories Everlasting Support Services, and the group provides numerous HIV-related services and programs, both online and at its headquarters in Atlanta.

This week, the group launches the THRIVE 365 app, offering same-gender-loving men of color across the nation, regardless of HIV status, a new way to connect and be affirmed. “Black lives revolve around love and art and connectivity—so much more than just health,” says Walker, the executive director of THRIVE SS, who cofounded the group with Daniel Driffin and Dwain Bridges. “The last thing we wanted to do was create an app that hinges only on health. THRIVE SS has done a great job of showcasing the community in its diversity and beauty, and we wanted to translate that into an app.”

Below, scroll through a selection of screengrabs from the THRIVE 365 app:

A screengrab from the THRIVE 365 appCourtesy of THRIVE SS

On the app, users will find original articles, forums (such as “I Love Beyoncé”), community groups, campaigns and empowering messages. “It’s not just an app to mindlessly scroll through,” Walker notes, adding that THRIVE SS partnered with Rutgers University in New Jersey to develop the app and include stress-mitigating aspects. “We are intentional about putting in psychosocial messaging and stories that can bolster your resilience. You’re also being fed while you’re inside the app.”

To build a safe and stigma-free space, THRIVE 365 requires potential users to sign up at Thrive365.ThriveSS.org. A team member will verify their identity and spell out the rules of engagement (online moderators ensure a polite and safe environment). What’s more, some forums and elements of the app are open only to users living with HIV. To be granted access, members must prove their status to the THRIVE SS team. “Our members like this extra level of vetting,” Walker says. “They feel safe and that people in the forums are actually living with HIV and not just there for the tea.” 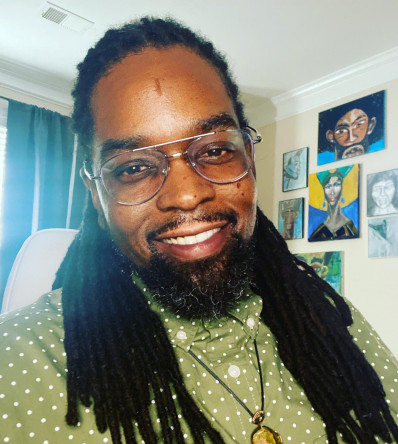 The app allows users to create profiles and to chat, but at this stage, it isn’t a hookup or matchmaking site—not that there’s anything wrong with that. In fact, Walker envisions incorporating dating into future iterations of the app, hopefully by next year.

And yes, you can get connected to local care through the app, regardless of where you live. “Already, folks reach out to us from Mississippi and Alabama, and we help them,” Walker says of the Atlanta team. “We don’t have the luxury of being localized anymore.” THRIVE SS has a trained team to help folks deal with myriad needs, including housing insecurity and access to pre-exposure prophylaxis (PrEP, an HIV prevention).

The staff are trained in what THRIVE SS calls its undetectables support model, which marries online and in-person support along with “Judy support”—which, Walker explains, is akin to getting help from a knowledgeable best friend. Importantly, support is offered in a celebratory mode while honoring the fact that many folks are not open about their status or private lives.

THRIVE SS also operates on-the-ground networks in Washington, DC; Nashville; and Oakland, California; and new networks are coming soon to Birmingham, Alabama, and New Orleans. In each of these areas, Walker explains, “we galvanize at least 10 people living there with HIV and give them the tools and skills—as well as the financial support—to do what we did in Atlanta, to create an online Facebook network and train on the app. We’re starting with 10 but want to build up to the hundreds.”

It’ll take a small army to keep up with the diverse needs of growing membership. Already, THRIVE SS spearheads a number of popular programs, including the Silver Lining Project, a group for mature Black men living with HIV; Lotus, a group for women with HIV; Project Grio, a digital storytelling group that produces a documentary each year (you can watch Colors on the Wall, about aging with HIV, on YouTube and below); and Project Innovate, a program funded by ViiV Healthcare through which THRIVE SS dispenses small grants to young innovators and pairs them with mentors and business owners.

And that’s not counting THRIVE SS’s regular get-togethers, like the upcoming FriendsGiving event Saturday, November 27, and the Kwanzaa Celebration December 30 (details about both are on the group’s Facebook page).

Who would have imagined that all this could spring from a private Facebook group started in 2015? But those original Facebook members wanted to meet in person, Walker recalls, and that grew into founding the nonprofit and launching its many programs and services. And once members started saying they wanted their own app, the launch of THRIVE 365 was inevitable.

“Everything we do,” Walker says, “is driven by our members and is member approved.”

This article originally reported THRIVE SS was incorporated in 2017. The correct year is 2015.