Drinking too much coffee could be dangerous to overall longevity, NPR reports. A new study published in Mayo Clinic Proceedings suggests that coffee drinkers should be sipping only two to three cups daily to maintain optimum health. Researchers said that after looking at the data of more than 40,000 people from the nationwide Aerobics Center Longitudinal Study, they discovered that subjects who drank more than 28 cups of coffee per week—or four cups a day—increased their risk of death nearly twofold: 56 percent for younger men and just over double for women. The same study also found that subjects older than 55 were seemingly unaffected by drinking large amounts of the beverage. 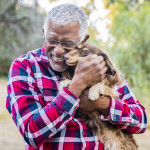 Dogs May Increase Longevity for Owners Who Survive Cardiac Events