Turn Up the Music

Chris Brown speaks up for the beautiful people at AIDS Project Los Angeles.

Celebrity PSAs for HIV are nothing new, but we were surprised to see Chris Brown promoting AIDS Project Los Angeles (APLA). The public service announcement aired on World AIDS Day, December 1, at a Los Angeles Lakers game and then repeated at other games that month. Brown approached APLA to work with his Symphonic Love Foundation to raise awareness and fight discrimination and stigma, says APLA’s executive director Craig E. Thompson, adding: “Chris made it clear he wanted to speak out on HIV/AIDS in a very public way.”

“You hear stories in the news—kids still getting kicked out of school because they are HIV positive or families broken by stigma,” says the 23-year-old pop star. “That’s just wrong and ignorant. It’s about knowledge. HIV is not something you catch from shaking hands.”

Sounds like Brown and APLA will make beautiful music together. 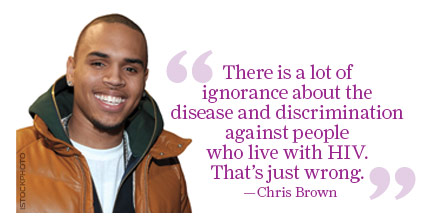