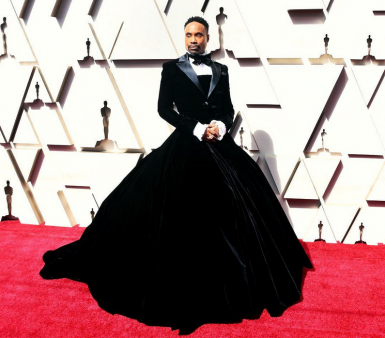 Did You Catch the Nod to an HIV-Positive Ball Scene Icon at the Oscars?

HIV played a part in the 2019 Academy Awards, though it certainly wasn’t a starring role. Actor Rami Malek won the Best Actor trophy for playing HIV-positive rock icon Freddie Mercury in Bohemian Rhapsody (more on this later), and actor Richard E. Grant received a Supporting Actor nod for his role as Jack Hock in Can You Ever Forgive Me? Both films are based on real events, and both Mercury and Hock died of AIDS-related illness in the 1990s.

Meanwhile, on the red carpet, Billy Porter stole the spotlight with his head-turning, gender-bending tuxedo-gown ensemble designed by Christian Siriano. Not until we scrolled through our social media feeds did we realize that Porter’s look was a nod to Hector Xtravaganza, a legend of New York’s house and ball scene. Xtravaganza, who was HIV positive, died in December at age 60, just weeks after he was honored in the 2018 POZ 100. You can read more about the grandfather of the House of Xtravaganza here.

It makes sense for Porter to nod to Xtravaganza, as Porter stars as the HIV-positive character Pray Tell in the FX series Pose, which follows members of the house and ball scene in 1980s New York City. Read more about Pose and its milieu here.

Now, about Malek’s acceptance speech, which you can watch above. At the podium, Malek pondered what it would have been like to tell a child version of himself that one day he would win an Academy Award. “I think his curly-haired little mind would be blown. That kid was struggling with his identity, trying to figure himself out. And I think to anyone struggling with theirs and trying to discover their voice—listen, we made a film about a gay man, an immigrant, who lived his life just unapologetically himself. And the fact that I’m celebrating him and this story with you here tonight is proof that we’re longing for stories like this. I am the son of immigrants from Egypt. I’m a first-generation American and part of my story is being written right now.”

Congrats to Rami Malek on a job well done, but I wish he would stop crowing about how Freddie Mercury was so unapologetic and authentic. There’s a big sequence in the movie where he’s squirming as he avoids the chance to come out. Harvey Milk he wasn’t.

Certainly, it would have been nice for Malek to mention HIV or AIDS, but he didn’t. Columnist Michael Musto, who has covered the entertainment and LGBT scenes for decades, wondered whether Malek gives Freddie Mercury too much credit for being unapologetic. After all, the rock star did not come out as gay or HIV positive when he had the opportunity to use his stardom as a platform. But, of course, that was a different time.

To learn more about Mercury, read the POZ interview with his biographer Mark Langthorne, who discusses the hidden meaning behind Queen’s megahit “Bohemian Rhapsody” and links Mercury to AIDS Patient Zero.

For more about Jack Hock in Can You Ever Forgive Me?, click here. And for a complete list of Oscar winners, go to Variety.

UPDATE: In an interview with Vogue, Billy Porter spoke about his Oscar gown by designer Christian Siriano. Porter didn’t mention Xtravaganza as a direct inspiration. Perhaps our headline should read, in a nod to red carpet queen Joan Rivers, “Bitch Stole My Look!”