National Black Leadership Commission on AIDS (NBLCA) is focusing its attention in the coming weeks on fighting the topic of stigma.

It looks like the new Sacha Baron Cohen comedy, The Brothers Grimsby is a flop. You may recall the controversy over a plot point in the film in which Donald Trump is infected with AIDS. At the film’s London premiere audience members reportedly cheered when it happened. Presumably, they thought that Trump had it coming.

I haven’t seen the movie (apparently I have plenty of company in that respect) so I’m not going to critique it or even condemn it. Nor will I use this as a platform to give the campaign Donald Trump has been running for U.S. president any more coverage than it deserves. What I want to focus on is the fact that the 1.2 million people living with HIV and AIDS in the United States — over 40 percent of them African American — are not the recipients of karmic retribution or divine punishment for supposed sins.

That terrible notion dates back to the 1980s when the first AIDS cases were reported. In those days the term Gay-Related Immune Deficiency (GRID) was coined for the disease because many of the early infections were found in gay men. Then as now, being gay bore a stigma and that gave rise to the idea that the victims of a deadly, sexually-transmitted disease (for which there was no treatment at the time) were being punished for their actions.

The concept was embodied in remarks made by Rev. Jerry Falwell in 1983:

I believe that when one breaks the laws of nature and the laws of moral decency — and I do believe homosexuality is moral perversion — when we go against nature — and God, of course, is the creator of nature — we therefore pay the prices for that. We do reap it in our flesh when we violate the laws of God.

In other words, AIDS is supposed to be the price paid for the alleged sin of homosexual acts. Others have made that point in the decades since, and anti-gay stigma has complicated efforts to address the HIV/AIDS epidemic to this day.

Of course, “AIDS as punishment” concept is wrong, and it is crucial to note that not all members of the faith-based community hold that view. In fact, the organization of which I am president and CEO, the National Black Leadership Commission on AIDS (NBLCA), most certainly does not hold that view, and has several pastors on its board, including board president W. James Favorite, PhD, who is Senior Pastor of Beulah Baptist Institutional in Tampa, Florida.

The current controversy over Cohen’s film lacks an association between AIDS and being gay, or even sexual transmission. Instead (and very problematically), Donald Trump and a character played by Harry Potter actor Daniel Radcliffe are infected by non-sexual contact with the blood of an HIV-infected African boy. This plays into the current intersections of stigma and racism that both reflect and perpetuate the fact that people of African descent have been hardest hit by the epidemic.

Regardless of what one thinks of Donald Trump and the displays of religious intolerance, xenophobia, racism and sexism shown throughout his bid for the White House, to suggest that he deserves AIDS only perpetuates the dangerous stigma against the disease and people living with it. I say dangerous, because as I have stated before, the stigma associated with HIV infection deters too many people from being tested or treated. Lives are affected or lost needlessly because of this.

NBLCA is focusing its attention in the coming weeks on fighting the topic of stigma, whether it be stigma faced by members of the LGBTQ community, African Americans or those living with HIV/AIDS. In New York on March 19 we’re inviting members of the public to share their stories of stigma to be featured in our upcoming campaign.

If we’re going to end the epidemic, we have to extend love and tolerance to all members of society and reject the notion that HIV infection is ever deserved. 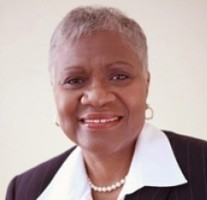 C. Virginia Fields is president and chief executive officer of the National Black Leadership Commission on AIDS (NBLCA). This article was originally published on The Huffington Post. For previous POZ coverage of the film, click here.