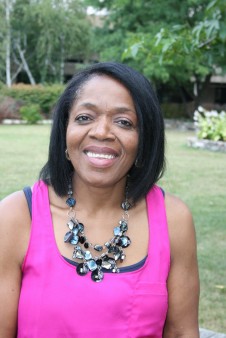 Right before I actually had a stroke, I did have signs. But I totally ignored them. I exercised daily, and I worked with a trainer. One year or six or seven months before I had the stroke, I’d get up, and I would have these crazy headaches first thing in the morning. A couple of times, I recall thinking, Oh, maybe it’s just stress from work. So I was talking to a friend of mine, and I said to her, “I keep having these headaches in the morning. But, I’m going to go to the gym and work it out,” and she said, “Maybe you should eat a banana [before working out].” But I don’t eat bananas. Then I’d see little flashes when I looked at something. I’d think that my contact lenses moved.

Then one day, I fell down the stairs in my house. How did that happen? I mean, I knew the layout of my home blindfolded. And I thought, This is strange. Then I realized after I had the stroke that those are all signs, especially the unexplained headaches. Then I thought about it, and I realized that two years before I had the stroke, my father had a stroke, and my mother and my sister and my father had high blood pressure.

Eventually, I went to the doctor with my sister. He told me I had borderline high blood pressure. I don’t know what the numbers were—whether it was 90 or higher. He wanted to put me on medication, so I took the medicine. On the third day, it just made me feel so sick, so I stopped taking it. I said I’d exercise more, eat less and then I would be OK. I was under a lot of pressure—a single parent who was working with a teenage daughter. I had a home, and I just felt like there was just so much to do, and I had to keep going.

On the day I had the stroke, it was my nephew’s birthday, and we were all going to out to dinner, so [my sister and my nephew] drove up [from New York City]. And my sister said, “OK, we’re here to pick you up, and we’re going to go out to dinner.” That was a surprise. So we went out, shopped for a little bit and had coffee. By the time we got to my mother’s house to pick up everyone else, it was maybe about six o’clock in the evening. I felt fine. I was actually sitting in the car reading and talking. I had no symptoms. But then I got up out of the car to change my position. As I was getting into the back of the car, I felt my leg get numb, like when your foot goes to sleep. I asked for someone to help me out of the car. But as my nephew went to grab me, I didn’t feel anything. All of a sudden, I saw his face moving, and I saw everyone’s mouths moving, their eyes wide, but I couldn’t hear what they were saying. I could kind of make out what they were mouthing, and it was the word stroke. I heard my nephew say, “Something’s wrong.” And he was looking at me and saying, “Aunt Beverly?” I asked, “What’s wrong?” And it was as if I couldn’t hear anything. I just could see, and I knew that my mouth was moving. I thought, They’re not listening to me, but maybe I’m not talking. My sister said that for the entire time while she was driving to the hospital, I was talking. But they couldn’t understand what I was saying. And they were talking to me, and I couldn’t understand what they were saying.

They took me to Lenox Hill Hospital [in New York City], where I stayed for five days. The doctors diagnosed me as having a hemorrhagic stroke, which is also called a cerebral vascular accident. I was in ICU for three days, then I moved from Lenox Hill to a rehabilitation hospital, and I was there for one month to for treatment—physical, occupational, speech—and they even had a class in relaxation therapy.

I could talk, but it was very slow and very measured. And there were words I’d speak that I felt were correct, but they weren’t. When you talked, they’d look at you and figure out what you said. But you’re wondering, Why are they looking at me like that? Did you understand what I said? And really they don’t because you’re using the wrong word. This was caused by the aphasia. And I was paralyzed along the entire right side of my body.

Initially, I had to do everything with my left hand. Someone had to show me how to eat and how to use my hands to pick up a fork. You must have someone’s help. When you go to rehabilitation, there are certain things that you cannot do on your own. They don’t even let you go to the bathroom on your own. Someone has to come and help you dress, and then they have to watch you, because some people who have strokes, their minds tell them that they’re fine and they can get up and walk, so they’ll put you in what looks like a crib [for your own protection]. One day, I tried to get out of the bed on my own and felt that I knew what I was doing. I felt that I could do this. But I was unable to walk.

I was in recovery for almost a year, and then I was in continual rehabilitation. Working out has to be a part of your life, especially strengthening exercises that you have to do with the fingers. The most intensive part of recovery for me was the first year. Just about every day, I would have occupational therapy, physical therapy, then I’d have speech therapy. And then I joined the gym at the rehab center. There was just a bike and a treadmill there, so I stopped going there and went back to the gym where I used to teach aerobics and where my girlfriend was an instructor. I went to the gym every day. I took off Saturdays, and Sundays I went to church. And that’s what I do now. I go to the gym as much as I can.

In addition, I decided to take some classes at a community college to help me with the aphasia and with speaking. I started taking one, two classes, and they told me I had to take at least 12 credits, and I had to have a major, so that’s what I did. I took English language arts and I found myself in the classroom with these young minds, even the instructors were young, and that really helped me. So I kept going and I graduated. I graduated with honors at the same time my nephew graduated from the University of Pennsylvania.

After that, I had the drive, and then I went to the State University of New York at Purchase. Then, I wanted to do something more, so I joined the American Heart Association to speak to people, to do advocacy. I met people who had strokes and some of them can’t even get out of a wheelchair, some of them can’t speak, and I realize when I talk to them I can see in their eyes that it’s so deep and it’s so dark a place you can get to because people can’t understand you. And just for that short time I wasn’t talking I knew what a devastating condition this can be.

During that time, my faith was so strong. The only thing I could hold on to was the word of God. I didn’t die, and I felt there was a reason that I’m still here. I felt in order for me to get to that place, I had to get to get to a certain place with myself. And that brought joy into my life. I felt if I could just give a little bit of that support and motivation to other people, I’d be so happy, so that’s how I dealt with those dark thoughts when they came.