Click to watch Nikko Briteramos in the “Cut the Stigma” campaign. YouTube/Lambda Legal

The 2018 discrimination lawsuit led Lambda Legal and the Black AIDS Institute to launch the “Cut the Stigma” campaign.

A barbershop must pay $75,000 plus attorney’s fees and legal costs to a man denied a haircut because he has HIV, according to a judge’s ruling posted by Lambda Legal, which represented the plaintiff in the case. 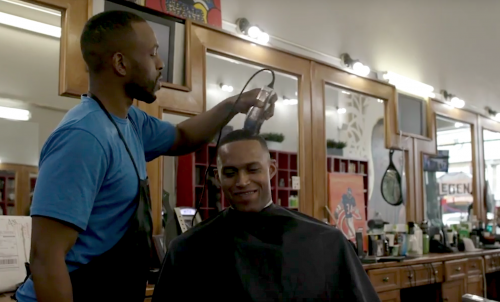 Nikko Briteramos gets his hair cut in a screenshot from the campaign.YouTube/Lambda Legal

The case inspired Lambda Legal to partner with the Black AIDS Institute to launch the “Cut the Stigma” campaign to address HIV-related discrimination and myths in the African-American community. The campaign includes a video staring Briteramos. You can watch the video above.

“Nikko’s experience highlights how Black people living with HIV are confronted with discrimination every day, but this judgment puts businesses on notice that discrimination will not be tolerated,” said Raniyah Copeland, Black AIDS Institute CEO, in a Lambda Legal Press release about the judgment. “Freedom for Black people means that ALL Black people deserve to live without fear of discrimination.”

“This judgment is proof that what happened to me in that barbershop and what happens to people living with HIV who experience discrimination just trying to do basic things in life like go to the dentist or get a haircut is simply not acceptable,” said Briteramos in the release. “Such discriminatory practices harken back to times not too distant during the period of American ‘Jim Crow’ and are equally unjust. I am even more grateful that I can continue to tell my story through the ‘Cut the Stigma’ campaign and share with people how harmful these moments of discrimination can be to those living daily with HIV and to the fabric of society.”

“This ruling is a terrific affirmation for our client, and it is a clear and forceful rebuke of intentional discrimination against people living with HIV,” added Anthony Pinggera, the Lambda Legal Law Fellow leading this case. “This is the end of Nikko’s case, but our work to raise necessary awareness in Black communities around the country to the ongoing issues surrounding HIV discrimination continues through our partnership with the Black AIDS Institute on the ‘Cut the Stigma’ campaign.”