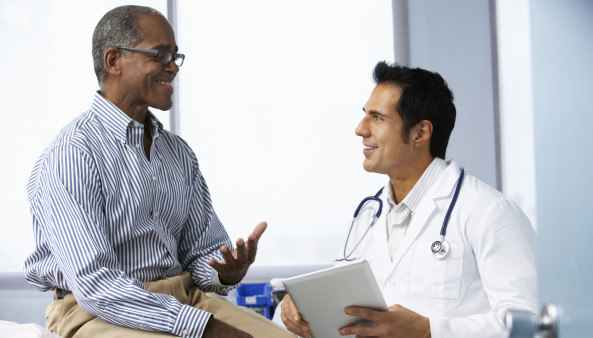 A new study clarifies the benefits and risks of treatments for those with multiple myeloma, a blood cancer more common among Black Americans.

Patients with multiple myeloma who have been treated with a three-drug combination therapy have a growing number of choices for subsequent treatment. Results of a new study led by researchers at Dana-Farber Cancer Institute can help patients and their physicians weigh benefits and risks of each option.

The study, presented June 5 at the Annual Meeting of the American Society of Clinical Oncology (ASCO) as a plenary session and published simultaneously in the New England Journal of Medicine, found that newly diagnosed patients treated with a triad of drugs (abbreviated as RVd) lived longer without their disease worsening if they received an autologous stem cell transplant soon after RVd therapy than if they simply had their stem cells collected for a possible future transplant. However, patients were just as likely to be alive more than six years after treatment regardless of whether they underwent an immediate stem cell transplant or chose to reserve transplant as a later option. Importantly the use of maintenance lenalidomide (Revlimid) in both groups continuously until progression conferred substantial clinical benefit.

The results are influenced by other key factors. While an autologous stem cell transplant yielded a longer progression-free survival (PFS)—the length of time patients are alive with no relapse of their cancer—the high doses of the chemotherapy drug melphalan (Pepaxto) given in advance of a transplant significantly increase patients’ risk of developing secondary leukemia and myelodysplasia later. Patients who have an early transplant also experience harsher side effects than those who decide to keep a transplant on hold, but those effects generally diminish three or four months after the transplant, providing patients with a recovery in quality of life over the longer term, despite a significant decrease during transplant.

Additionally, researchers found that patients who had minimal residual disease (MRD) following RVd therapy—meaning tests still detected a small number of myeloma cells in their body—had a longer PFS if they underwent an early transplant than if they delayed a transplant. However, patients who were found to have no MRD after initial treatment did just as well whether they had an early transplant or not.

“Now more than ever, treatment for multiple myeloma can be adapted for each patient,” says Paul G. Richardson, MD, clinical program leader and director of clinical research in the Jerome Lipper Multiple Myeloma Center at Dana-Farber, who will present the study findings at ASCO and is the lead author of the paper in the New England Journal of Medicine. “Our study provides important information about the benefits of transplant in the era of highly effective novel therapies and continuous maintenance, as well as the potential risks, to help patients and their physicians decide what approach may be best for them. This is particularly relevant as we have now further improved the induction treatment for younger patients with newly diagnosed myeloma using quadruplet regimens incorporating monoclonal antibodies, such as RVd combined with daratumumab.”

The clinical trial led by Richardson, dubbed the DETERMINATION study, enrolled 722 patients under the age of 65 with multiple myeloma. Eighteen percent of participants were African American—whose risk of developing myeloma is twice that of whites—giving the trial the largest enrollment of African Americans of any similar myeloma treatment study to date. Fifty-six cancer centers across the U.S. were involved in the study. Dana-Farber’s Kenneth C. Anderson, MD, program director of the Jerome Lipper Multiple Myeloma Center and LeBow Institute for Myeloma Therapeutics, and Nikhil Munshi, MD, director of Basic and Correlative Science at the Jerome Lipper Multiple Myeloma Center, are co-senior authors of the study.

All participants received the RVd combination therapy, which includes the drugs lenalidomide (Revlimid), bortezomib (Velcade), and dexamethasone. Afterward, all received lenalidomide as “maintenance” therapy to keep myeloma from coming back until progression. Half were randomly assigned to undergo an autologous stem cell transplant (which uses their own stem cells) shortly after completing initial treatment with RVd, and half had their stem cells collected and stored for a possible future transplant.

As a group, the participants had the best response to RVd of any study to date, Richardson notes. Patients in each arm of the trial responded to treatment at roughly the same rate both for partial and complete response. Patients who did not undergo an early transplant had a median PFS of 48 months; conversely, those who did receive an early transplant had a median PFS of 68 months—or more than five years. However, the overall survival rate was virtually the same—about 85%—for both groups with a median follow-up time of 76 months.

“This tells us that for patients who had kept a transplant in reserve, they had the same overall survival as those who had had a transplant right away, despite there being such impressive initial disease control for the patients in whom a transplant was used early,” Richardson remarks. “Our data also suggest that maintenance really matters and using it until progression is key to improving outcome.”

He continued that if their disease relapsed, patients delaying transplant received other newer and active therapies, such as monoclonal antibodies and/or next generation novel agents and achieved the same survival as those who had undergone an early transplant. Indeed, the study investigators found that only 28% of patients used the reserve option of a transplant.

“It demonstrates the extent to which patients now have options and that we have new data to guide them in balancing the pluses and minuses of each approach,” he noted.

The study also gave evidence of one of the important long-term risks associated with high-dose melphalan and autologous stem cell transplant. Ten of the patients who had undergone an early transplant developed acute myeloid leukemia (AML) or myelodysplastic syndrome (MDS) within six years following their transplant, while no patients in the other arm of the trial did. Both secondary AML and MDS are hard-to-treat cancers and fortunately rare, but the risk that they will develop increases over time—an important consideration for younger patients weighing a transplant early in their treatment course.

The patients in the study will continue to be followed for effects on overall survival and long-term safety. Whole-genome sequencing to assess mutagenicity of therapy and its impact; additional quality-of-life assessments, and other correlative analyses are ongoing.

DETERMINATION was funded by grants #U10HL069294 and #U24HL138660 to the Blood and Marrow Transplant Clinical Trials Network from the National Heart, Lung, and Blood Institute and the National Cancer Institute, as well as the RJ Corman Multiple Myeloma Research Fund, Celgene/BMS, Millennium/Takeda Pharmaceutical/Biotech Company.

This article was originally published June 5, 2022, by Dana-Farber Cancer Institute. It is republished with permission.