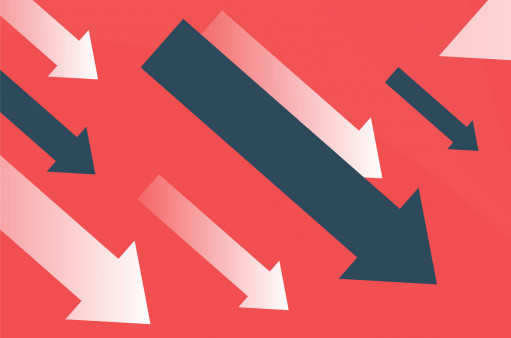 Overall cancer death rates continued to decline among men, women, children, and adolescents and young adults in every major racial and ethnic group in the United States from 2015 to 2019, according to the latest Annual Report to the Nation on the Status of Cancer. From 2014 to 2018, overall cancer incidence, or new cases of cancer, remained stable for men and children but increased for women and adolescents and young adults.

This year’s report, published October 27, 2022, in Cancer, also highlights longer-term trends in pancreatic cancer, as well as racial and ethnic disparities in incidence and death rates for many individual cancer sites.

All of the findings in this report are based on data from before the COVID-19 pandemic.

“Today’s report is good news in our fight against cancer and is a reminder of the importance of President Biden’s Cancer Moonshot initiative,” said Department of Health and Human Services Secretary Xavier Becerra. “I’m deeply impressed by the progress we’re making against cancer and firmly believe we can meet the President’s goal of reducing the death rate from cancer by at least 50% over the next 25 years. We can and must end cancer as we know it.”

The Annual Report to the Nation on the Status of Cancer is a collaborative effort among the National Cancer Institute (NCI), part of the National Institutes of Health; the Centers for Disease Control and Prevention (CDC); the American Cancer Society (ACS); and the North American Association of Central Cancer Registries (NAACCR).

The report is based on a combined cancer incidence data set from NAACCR composed of data collected by CDC’s National Program of Cancer Registries (NPCR) and NCI’s Surveillance, Epidemiology, and End Results (SEER) Program, as well as mortality data from CDC’s National Center for Health Statistics. 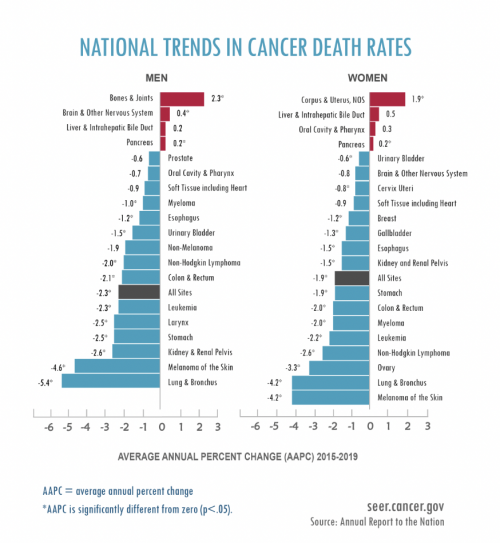 From Annual Report to the Nation on the Status of Cancer, 2022

“The findings in this year’s Annual Report to the Nation show our ongoing progress against cancer, continuing a more than two-decade trend in declining mortality that reflects improvements in preventing, detecting, and treating cancer,” said Monica M. Bertagnolli, MD, director of NCI.

“The advances shown in the report underscore the importance of working together across society to develop effective, equitable approaches to tackle this complex disease. I look forward to working with all our partners in the cancer community to meet these challenges head-on, because people affected by cancer—and that includes all of us—are counting on it.” 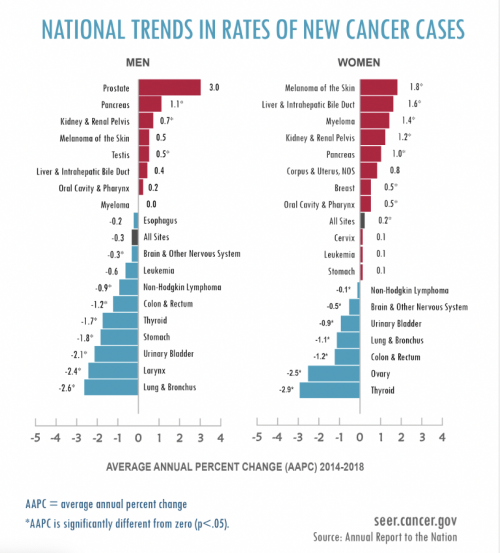 From Annual Report to the Nation on the Status of Cancer, 2022

“Through funding scientific breakthroughs and raising awareness about prevention and early detection, we are making progress against a subset of the more than 200 diseases we call cancer,” said Karen E. Knudsen, MBA, PhD, chief executive officer, American Cancer Society. “However, for certain cancer types, concerning trends persist, and durable cures remain elusive for many people. We are committed to improving the lives of all cancer patients and their families, through accelerating research, increasing access to care through advocacy, and by providing direct patient support in communities across the nation, toward the shared goal of eliminating cancer as we know it.”

Among other key findings of this year’s report:

“Factors such as race, ethnicity, and socioeconomic status should not play a role in people’s ability to be healthy or determine how long they live,” said Lisa C. Richardson, MD, MPH, director of CDC’s Division of Cancer Prevention and Control. “CDC works with its public health partners—within and outside the government—to address these disparities and advance health equity through a range of key initiatives, including programs, research, and policy initiatives. We know that we can meet this challenge together and create an America where people are free of cancer.”

These improvements in survival may be associated with improvements in therapy, the researchers said. No improvement was seen for unspecified and other pancreatic tumors, which tended to have a higher proportion diagnosed at older ages than the other types.

“Pancreatic cancer incidence and survival reflect both the underlying risk of disease as well as the difficulty of diagnosing pancreatic cancer at a treatable stage,” said Betsy A. Kohler, MPH, NAACCR executive director. “As advancements in screening technology and effective treatments for early-stage disease become available, we are hopeful for greater improvements in pancreatic cancer survival, which historically has been a particularly lethal cancer type.”

For more about the report, see: https://seer.cancer.gov/report_to_nation.

This news release was originally published by the National Institutes of Health on October 27, 2022.