Like 6.7 million other women in the United States, Terrie Williams is the primary caregiver for a loved one suffering from Alzheimer’s disease 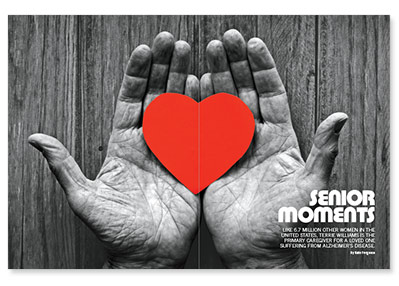 Click here to read a digital edition of  this article.

When Terrie Williams talks about her 82-year-old mom, Marie, her eyes soften and her voice throbs with an emotional mixture of love, pride and pain. Williams’s mother is in the early stages of Alzheimer’s disease, the most common type of dementia, a decline in mental ability that’s severe enough to interfere with daily life.

Williams is the founder and CEO of The Terrie Williams Agency, a public relations firm. She’s also an internationally known lecturer and mental health activist, in addition to her being a sought-after inspirational speaker who frequently travels. “It’s hard because I run a business and you have to go out and generate business; it’s a tremendous responsibility,” Williams says. “But I’m juggling.”

One of the things Williams is juggling is caring for Marie, whose cognitive decline began with one of the common early signs of Alzheimer’s. “I started forgetting stuff,” Marie says.

Sitting in the chair next to Marie’s, Terrie quietly watches her mom before adding more details about what happened next. “We had to take her to a neurologist,” she says. “But you know what? He didn’t know. He never used the word ‘Alzheimer’s.’”

Williams also visited the same doctor. She had concerns because her father died in 2013 of advanced dementia and then her mother began becoming forgetful. “It runs in my family, so I thought it would be a smart move to get myself a brain scan. Nothing showed up.”

When she spoke with the neurologist again about her mother, this time he named the disease and discussed Alzheimer’s. “He said, ‘Typically, doctors don’t say the word to their patient,’” Williams says, as she looks at her mother. “Then it just began to be this journey of trying to understand and just assuming more of a caregiving role because my mom is still very independent. She’ll walk around the block and get right back on her own.”

For a moment she pauses, then directly engages her mother. “What are you thinking right now?”

“Well, I know that I forget a lot of stuff,” Marie replies. “I put things on my calendar so when I don’t remember what I’m supposed to do, I have it on the calendar. Then I know, OK, this is what I’m doing today. I just make a routine for myself.”

One common misconception about those with Alzheimer’s is that the disease immediately robs them of their independence. But this isn’t necessarily so. Like Marie, many people in the early stages of the disease may simply suffer from short-term memory loss without suffering a decline in their ability to think. For a person with Alzheimer’s this kind of mild cognitive impairment doesn’t affect their ability to perform everyday tasks at work or at home, and it doesn’t otherwise stop them from functioning normally. “I know what my limitations are,” Marie says. “But I can put my sneakers on and go for a walk.”

Sometimes, Marie, who was a social worker for the Mt. Vernon, New York, school system, walks over to the Board of Education offices to visit friends and associates. “I think I function very well,” she says.

At one point, Marie was still driving her car. “Mom was just very independent and drove herself everywhere,” Williams says. “But I remember when it became clear that she couldn’t, or shouldn’t, continue to drive.” So Williams asked her mother to surrender the car keys.

“I’d say that was one of the most gut-wrenching things to do,” Williams recalls. “My sister came from upstate New York because we knew that we needed to have that conversation with my mother together. That was a tough one.”

To help ease a loved one through this transition, the Alzheimer’s Association’s Dementia and Driving Resource Center advises family members who must broach this difficult subject to deal with this issue in the early stage of the illness. The association suggests the conversation be planned out step by step to include how to start the talk, ways to address resistance and what to do if the talk isn’t successful. They advise that it may become necessary to enlist the family doctor to write a letter or prescription saying your loved one mustn’t drive.

In addition, it may be helpful to ask an objective third party—someone of authority or an individual the person with Alzheimer’s trusts and respects—to weigh in. And if the conversation fails, then, like Williams says her sister, Lani, did, you must “put your foot down.” That means taking away the car keys, or removing or disabling the vehicle.

“She didn’t fight, but she kept giving reasons to show that she could drive,” Williams recalls. But, eventually, Marie relinquished the car keys to her daughters.

But Marie is still self-sufficient in other aspects of her life. She’s perfectly able to take her medications that Diana Valdes, a nurse and family friend, sets up for her each week. At one point, Williams worried about whether her mother would be able to handle taking her medications by herself. But the real hurdle was to get her mom to let someone come in to organize the prescription drugs.

“That was a bit of a transition too,” she reminds her mother, “because you didn’t want that for a while.”

“Then I accepted it,” Marie says.

“She probably could do it by herself,” says Josephine Floyd, who sits at the table on a chair next to Williams. “But we just didn’t want to risk it.”

As she speaks, she looks at Marie who is seated across from her. “Now her meds are lined up and all she has to do is go by what date it is and take what’s there.”

Floyd is Marie’s sister, the only other one of her nine siblings still living. In the family, Floyd is better known as Aunt Jo. Williams calls this tall, stately woman “the rock of the family,” who  is “like a second mother” in their clan.

“She makes these meals for mom, so her freezer is full of Aunt Jo’s cooking,” Williams says. “And her husband, who we call ‘Uncle Floyd,’ he’s a blessing. If there are things that need to be taken care of, such as the house or my car, it’s Uncle Floyd to the rescue!”

Besides Williams, who is her mother’s primary caretaker, and Aunt Jo and her husband, Terrie’s sister, Lani, and Terrie’s niece, Pat, are some of the other family members who stand ready to help. In addition, Williams says, her mother has a wide circle of friends in Mt. Vernon, where she lives, who regularly take her out for lunches and dinners.

Says Floyd, “Momma always taught us that family should stick together, and that’s what we’ve always done. We look after each other.”

Not family, but considered as such, Maxine Larman is Williams’s home aide. She is another member of Marie’s dedicated support system. Larman works with Marie five hours each day, for five days each week, under Williams’s and Floyd’s supervision.

Perhaps the biggest challenge for caregivers such as Williams is to make sure they have enough time for themselves. But this means that sometimes Williams must put herself first. “There are times I know that mom would like some company, and perhaps wants me to spend the night at her place,” Williams says. “But I don’t do it as often because I need space. I’m mindful of what I have to do to protect myself so that I could be there for her. And it’s an honor and a blessing to be there for her, in terms of all that she did and gave to me and to my sister. It’s a labor of love, and it’s a lot—and Mom knows that.”

Indeed, many caregivers find themselves quickly overwhelmed, especially if they have no other help. “But it’s OK to reach out to people,” Floyd says. “I learned that.”

For Williams, a single woman who has an adopted son, thinking about her mother’s decline also makes her consider her own future. She too is at genetic risk of Alzheimer’s.

Says Williams, “I remember my mother saying, ‘We should get you a daughter to have somebody take care of you like you take care of me.’”

For a moment her voice catches in her throat, and then she finishes speaking. “That was an emotional moment.”