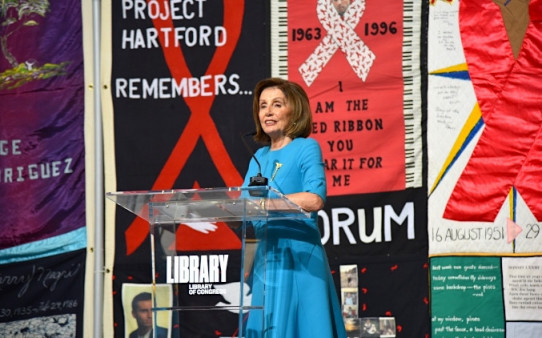 The National AIDS Memorial in the San Francisco Bay Area will be the quilt’s caretaker.

The AIDS Memorial Quilt will move from Atlanta to the San Francisco Bay Area next year. The quilt’s new steward will be the National AIDS Memorial, which also oversees the AIDS Memorial Grove in Golden Gate Park and several other programs. In addition, the Library of Congress in Washington, DC, will preserve documents related to the quilt, including letters, news clippings and photos, in its archives.

The NAMES Project Foundation has cared for the quilt and its associated items since 1987, when the first panels of the quilt were created as a way to remember those lost to the epidemic. It has been headquartered in Atlanta since 2001.

Librarian of Congress Carla Hayden, joined by Speaker Nancy Pelosi, Rep. John Lewis and Rep. Barbara Lee, announced that the Library of Congress will serve as the home of the National AIDS Memorial Quilt Archive, preserving its legacy and housing the vast collection as part of our American Folklife Center collections. The collection of more than 200,000 items includes personal letters, photographs, biographical records, tributes, epitaphs, news clippings, and a sewing machine used to stitch together part of the Quilt. For more information about the collection, visit our homepage at loc.gov. @speakerpelosi @repjohnlewis @repbarbaralee #AIDSMemorialQuilt #NAMESProjectFoundation #AmericanFolklifeCenter #libraryofcongress

The move was announced during a ceremony at the Library of Congress that included House Speaker Nancy Pelosi, who represents San Francisco and originally ran for Congress on an AIDS platform. She was joined by congress members John Lewis (D–Ga.) and Barbara Lee (D–Calif.) and representatives of the NAMES Project Foundation, the National AIDS Memorial and the Library of Congress, according to a press release from those three organizations.

“On behalf of the people of San Francisco, it is a privilege to welcome the AIDS Memorial Quilt permanently back to the Bay Area,” Pelosi said during the ceremony, which you can watch in the YouTube video below.  “For over 30 years, the AIDS Quilt has stood as a beautiful tribute to those lost to the devastation of HIV/AIDS and has reminded us all of our responsibility to tell the personal stories lovingly stitched into every panel.”

Currently, the quilt consists of more than 50,000 panels, each measuring 3 by 6 feet and made by the friends, family and other loved ones of individuals who died of AIDS-related illnesses. Together, the panels commemorate more than 105,000 people.

The American Folk Life Center at the Library of Congress will preserve more than 200,000 items, including biographical records and correspondences of the panel makers, in its archives, making them available to researchers and the public. 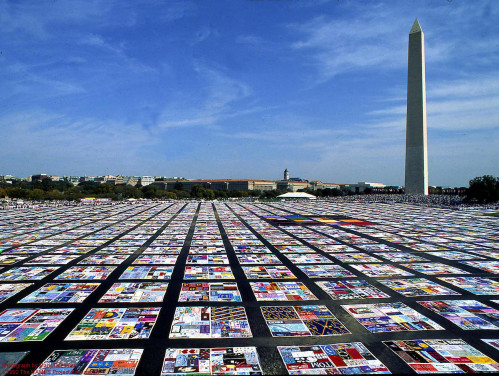 AIDS Memorial Quilt on the National MallNational Institutes of Health

Thousands of panels of the quilt are displayed throughout the world each year as a way to memorialize, educate and raise awareness. In the United States, according to the press release, about 636,000 people have died of AIDS-related illnesses since 1981, including about 15,000 in 2016.

In San Francisco, the quilt, which weighs about 52 tons, will be moved to a warehouse near Oakland International Airport, John Cunningham, executive director of the National AIDS Memorial, told the Bay Area Reporter.

Cunningham said the nonprofit will launch a fundraising initiative to help care for the quilt and that the quilt may become part of the memorial’s Center for Social Conscience, which is now in the planning stages.

He added that the NAMES Foundation’s newer initiative, titled Call My Name and targeted among the African-American community, will continue and possibly expand to include other populations so that they can create panels and be included in the quilt’s representation.

To learn more about the memorial and grove, read POZ’s interview with Cunningham, “Healing Through Remembrance.”