When celebrated talk show host Wendy Williams experienced the “scary stare” often associated with an overactive thyroid, the “Queen of All Media” bowed to her concerned family and saw her doctor.

(Scroll down for the Real Health TV interview with Wendy Williams.) 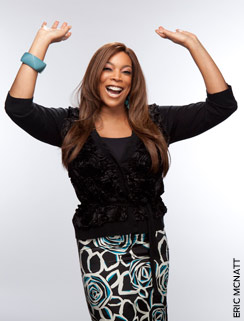 When she first began losing weight 10 and a half years ago, Wendy Williams thought she’d scored a blessing. The pounds simply melted away—so what if it left her drenched in sweat. That was a small price. “I thought, thank God, my metabolism has finally caught up to my ravenous appetite,” Williams recalls. “I loved the way I looked. But besides the sweat, my eyes looked popped out a lot. It was brought to my attention by my family, so I went to the doctor.”

As it happened, Williams was due for a follow-up visit to her doctor anyway. Previously, she’d been given a D&C (dilation and curettage) to clear her uterine lining after suffering a miscarriage. When she arrived at the doctor’s office, her physician took one look at her, stood behind her and felt her throat. (This is where the thyroid gland is located. See the sidebar on page 23 for more about this small but important gland.)

When the doctor finished examining Williams, she told her to book an appointment with an endocrinologist to have her hormone levels checked. As the doctor continued the checkup, she asked Williams if she’d been through any stress lately.

Williams replied that she’d started a new job after an ugly ending to her old one. “My doctor told me most likely the stress had triggered the thyroid condition,” Williams says. “[My weight loss] wasn’t my metabolism catching up. It was hyperthyroidism.”

Hyperthyroidism includes a number of diseases caused when the thyroid gland secretes too much thyroxine, a type of hormone. Why this happens doctors don’t know, but some of the risk factors for hyperthyroidism include age, gender, genetics, stress, pregnancy and smoking. Those with hyperthyroidism are also affected by iodine levels in the body. (Our bodies use iodine to make thyroxine.)

In Williams’s case, she had Graves’ disease, the most common form of hyperthyroidism. When people have Graves’ disease, their immune system mistakenly attacks the thyroid gland, resulting in an overproduction of thyroxine. Williams experienced other tell-tale signs of Graves’ disease, such as hot flashes and unexplained weight loss. She also believes that this thyroid disease possibly contributed to her thin-hair problem. “I’d say that thyroid disease probably has about 25 percent to do with my hair being thin overall, even though I was born with thin hair and a majority of it is inherited,” Williams says.

Hair problems, along with the other symptoms Williams experienced, are common signs of Graves’ disease.

“People with an overactive thyroid have warm, moist skin and fine, silky hair,” explains Leonard Wartofsky, MD, MPH, an endocrinologist and chairman of the department of medicine at Washington Hospital Center in Washington, DC. “It may sound nice, but their hair falls out more rapidly because it’s abnormal hair. These patients also have difficulties with conception and are prone to miscarriages.”

The extra thyroid hormone makes you feel warm instead of cold, and you perspire a lot. It also makes the heart race and speeds digestion in the gastrointestinal tract, which causes diarrhea. Thyroid disease—both hyperthyroidism and hypothyroidism (when the thyroid gland is underactive and doesn’t produce enough thyroxine)—affects women five to eight times more than men. And hyperthyroidism affects the body on every level, even sometimes causing abnormal behavior. “Hyperthyroid people may get married or divorced inappropriately because of poor judgment,” Wartofsky says.

For Williams, being diagnosed with an overactive thyroid couldn’t have come at a worse time. “I was in between miscarriages,” she shares, “but my husband and I wanted a baby—we were on a mission.”

Before Williams knew about her thyroid condition, she struggled through a very public departure from her job with a former employer, Hot 97 WQHT-FM (a popular hip-hop and R&B radio station based in New York City). “That is the precise time that my thyroid went wack-a-doodle,” Williams recalls. “By the time I settled into my new job in Philadelphia, I’d gone through a one-month court battle and then had a miscarriage without knowing I was pregnant.”

Once Williams received the diagnosis from her endocrinologist, she chose to undergo a single-dose treatment that uses radioactive iodine (dissolved in water or encapsulated) to destroy the overactive thyroid cells. Once this type of treatment kicks in, the thyroid gland becomes underactive. Patients must then take a thyroid hormone pill each day for life and remain under a doctor’s watchful care.

Williams went to the hospital to get treated. She was allowed to come home immediately after the treatment. But her doctor cautioned that she could only have brief contact with family members.

These precautions are necessary to reduce the amount of radiation exposure to family and friends coming from the treated person’s neck. “You can’t sleep next to your husband or be in the same room with him,” Williams says. “I was sequestered in the garage for about 48 hours.”

After the treatment addressed her thyroid disease, Williams and her husband resumed their babymaking mission. She became pregnant, but after she had her son, she had to re-do the treatment when her thyroid gland became reactivated. Once again, the radioactive iodine treatment worked.

Today, Williams pops one tiny pill each day to keep her thyroid condition stable. She also watches what she eats to keep her iodine intake in check.

The reason Williams monitors how much iodine she gets from food is because the body uses this nutrient to make thyroxine. Thyroid patients on Levoxyl (the med Williams takes) have to make sure any additional iodine from food does not interfere with the drug.

“I have a pretty reasonable diet,” Williams says. “I eat a little bit of everything—nothing in excess. But the med does affect what I can do to lose weight. I can’t afford for my metabolism to start racing, so I can’t take diet pills, and I stay away from energy drinks.”

Williams also tries to keep an eye on the built-in tensions that come with an entertainer’s busy life.

“We have to watch our stress so we don’t create health problems for ourselves,” Williams advises. “You know, high blood pressure, thyroid disease or whatever. Fortunately, right now, I don’t take any other medications so there’s nothing interfering with my thyroid treatment.”

Besides the radioactive iodine treatment Williams chose, doctors also treat Graves’ disease with prescription meds that reduce the production of thyroid hormone or block its actions. And if these treatments fail, doctors can remove the thyroid gland altogether.

Right now, Williams is excited about the opportunities her TV show and her reputation for straight talk give her to speak out about issues she finds important, such as thyroid disease. What made her go public and speak out about this personal issue? She wants to challenge both women and men to get their thyroid glands tested to make sure their hormone levels are balanced.

Before you think about going on a diet for weight loss or weight gain, check your thyroid, Williams says. If you want to know why you’re always feeling hot, check your thyroid. “I’m 46 years old, so a woman my age may think she’s going into early menopause when in actuality she may have thyroid disease,” Williams says. “It’s just a very important thing to check. And if it goes untreated? Well, you know, all kinds of scary things can happen.”

Such as? First off, there’s that bug-eyed effect and “scary stare” that Williams experienced, which, she says, prompted actress Daryl Hannah to make “an off-color comment” about her eyes when Williams hosted a series of specials on VH1.

“I said to her, ‘I have thyroid disease. It produces a scary stare!’” Williams exclaims, recalling that mortifying red-carpet moment. But she chooses not to dwell on that incident or Hannah’s response. Instead, Williams drops the name of another well-known woman who shares her condition. “Probably one of the most famous people with Graves’ disease that we know is Barbara Bush, the former first lady,” she says.

This eye disorder exhibited by Bush, Williams and other Graves’ disease patients is called Graves’ ophthalmopathy. It happens when tissues and muscles behind the eyes swell and push the eyeballs forward.

Williams’s treatment eliminated her bug-eyed stare. She now gets her eyes checked once a year by an eye doctor who specializes in thyroid disease. At some point, Williams says, she may want an eye job because she is now in the public spotlight more than ever. “If I decide that I need a tune-up on my eyes—because good black does crack!—I can’t go to a plastic surgeon who does good breasts or good stomach,” she says, tossing off the comment with her signature sass. “I’ve got to go to a doctor who specializes in thyroid disease.”

If Williams does elect to have the procedure, we expect she’ll broadcast the details to the entire world—and we’ll all get educated during the extravaganza. When asked if there’s anything else she’d like to say to Real Health readers, Williams pauses for a moment then leans close. Putting a little bass in her voice, she proclaims: “How you doin’?”

The trademark, tongue-in-cheek question is followed by a sparkle in her eye and that big, throaty, unforgettable, divalicious Wendy Williams laugh.