It’s not that women mind getting older, says actress and entrepreneur Vivica A. Fox, they just don’t want to look it! 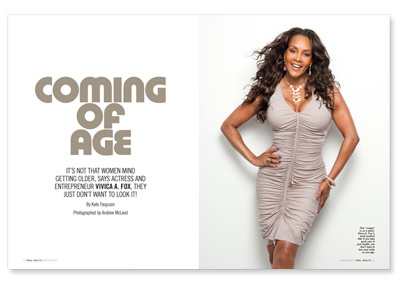 Used to be that when you hit 40, you were considered over the hill, especially if you were a woman. Today, that’s changed. Just ask 47-year-old Vivica A. Fox. The actress and entrepreneur is called a “cougar.” That means a sexy, 40-plus woman younger men find hot and desirable enough to date.

Today, Fox is not alone. Many women older than 40 often look half their age. Indeed, some women look even better at 40 than they did at 20. The reason? Because, much like Fox, they take good care of themselves by watching what they eat and staying physically active. “I work out three to five times each week,” Fox says. “I do a lot of water aerobics, cardio and light weight lifting.”

But staying active is only one part of the reason folks retain their health and good looks longer. According to data from the Federal Interagency Forum on Aging-Related Statistics, today’s older Americans enjoy unprecedented longevity and better health than previous generations. What that means for Fox and other baby boomers (those born shortly after World War II, from 1946 to 1964) is there’s a new time line and definition for aging. And this is challenging many people’s misconceptions about getting older.

“Commonly, people think that [when you age] you’re always going to develop Alzheimer’s disease or some sort of dementia and, basically, sit in a rocking chair, folded up and withering away,” says Marie A. Bernard, MD, the deputy director for the National Institute on Aging. “But for a significant part of people’s lives, even [for those going] into their 80s, 90s, and some folks in their 100s, they can [remain mentally sharp and] be up and about and active.”

The best way for people to retain their physical health and mental sharpness, Bernard says, is for them to adhere to some tried-and-true advice. “Eat well, exercise and get plenty of rest,” she suggests, adding that “all of the things that help enhance physical health may help with mental health as well.”

This year, the first baby boomers reached the standard retirement age of 65. Boomers account for nearly 76 million people in the United States, or about 24 percent of the more than 313 million Americans. But for Fox and many boomers, age really is just a number that has nothing to do with how good they can look and how confident they feel. “I don’t have a problem with aging whatsoever,” Fox says. “I have accepted that I’m not a 20-year-old. But if you take care of yourself, you should be able to age gracefully and still always look good. Getting older doesn’t automatically mean you lose your looks.”

But retaining your physical attraction as time marches on isn’t the only thing you have to look forward to when you age. “There’s your third life, when you’ve discharged your responsibilities to family and you have an opportunity to discover things about yourself,” Bernard says about older age. “This can be a really wonderful and productive phase of life people can look forward to and enjoy.”

What’s more, while you enjoy this third phase of life, who says you can’t look great? To retain your physical attractiveness through the years, heed research that pinpoints key bad habits that visibly age you faster, kicking your looks to the curb. One such habit is not maintaining skin health, says Dina Strachan, MD, a New York dermatologist. Her advice? You should gently cleanse your skin, moisturize it day and night and use products with sunscreen.

Strachan also suggests people watch their diets. “We know that when people have nutritional deficiencies it shows up in their skin,” she says. “A well-balanced diet with adequate nutrients is important to skin health.” 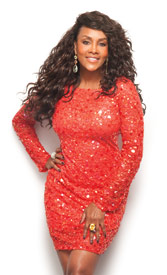 Something else to stay away from, Strachan says, is lighting up: “Smoking will make you look older,” she warns.

For nonsmoker Fox, her approach to health and fitness is common sense and practical. She’s a busy woman in a high-stress business, so she manages her time like a master strategist. “I make sure I sleep well, get plenty of rest and make time for exercise,” she says.

Like Fox, there are many people whose response to aging is to take better care of themselves so they can stay healthy and look their best. The FACE Report, a survey of Canadian women’s attitudes toward aging and the cosmetic enhancement industry, found that while nine in 10 women didn’t mind getting older, they preferred not to look it.

But Fox’s commitment to overall fitness isn’t just one-dimensional. For her, being healthy also includes staying spiritually grounded. “Normally, I start off my day with a scripture my girlfriend in Atlanta sends me,” she says. “When I wake up, I thank the Lord because there are some people who didn’t get to wake up or they woke up but couldn’t get out of bed.”

In addition, Fox says, “I try to keep a circle of positive friends around me. A few years ago, I cleaned house and got rid of a lot of negative people and forces in my life. The people around me have to be positive and motivating.”

Indeed, being surrounded by positive images is also an important part of aging well. “We need to see people who look like us aging gracefully and beautifully,” says Aisha C. Young, MA, a gerontologist—that’s someone who studies aging—located in Colorado Springs, Colorado, who is the founder of African Americans in Gerontology.

Young believes our society is still overwhelmingly youth oriented. But Fox, like many women, says she’s not bothered by this cultural obsession. “I’ve always wanted to be older—to be very honest—because with age comes wisdom, or it should,” Fox says. “My role models are beautiful women, such as Sophia Loren, Pam Grier, Tina Turner and Diana Ross, who all look better the older they get.”

In the United States, a survey conducted on behalf of the National Women’s Health Resource Center found that, in general, women had a positive outlook on aging. What’s more, they were inspired by other women who had positive attitudes toward aging and who stayed active as they grew older.

For Fox, one of aging’s most positive benefits was the opportunity to take more control of her life and career. “I’ve been doing projects that I want to do,” Fox says. “My wig line at vivicafoxhair.com is doing absolutely wonderful, and I am very satisfied right now because all the projects and things I am involved in are my choice.”

Is Fox’s independence the real fountain of youth? Well, researchers are looking into the ways financial independence and social support affect people as they age. One University of Michigan study on health and retirement has been following people since 1992, says James S. Jackson, PhD, the director for social research at the University of Michigan. “We’re trying to understand how older people’s health influences their retirement decisions and the quality of their lives at that point,” Jackson says. “The study has produced an incredible array of important findings.”

But Fox isn’t waiting for research results. She’s an active participant in creating her own tomorrow. Besides her ongoing business ventures, Fox is slated to star in a new Robert Townsend–directed film called In the Hive, scheduled for a 2012 release.

And you may also have seen her in the Hallmark Channel’s original holiday movie Annie Claus Is Coming to Town.

Obviously, Fox is one cougar still on the prowl to make the most of passing years.