Starr Phipps had epileptic seizures since childhood. Today, an implanted VNS device helps the 52-year-old get on with her life—and her lessons.

Her grandmother called them “fits,” and the school nurse said she had “head problems.” What Starr Phipps had was epilepsy, a disorder in which the electrical system of the brain malfunctions and causes alarming convulsive seizures.

“Back then, I think even more people didn’t understand what seizures were,” says Phipps, who is now a 52-year-old office administrator and patient educator. “My parents weren’t formally educated and didn’t understand that I needed to see a neurologist or specialist, so it was really hard. I can remember as early as 9 or 10 years old not wanting any of my friends to know what was happening to me.”

Phipps was finally correctly diagnosed after one of her teachers who had a son with muscular dystrophy—another condition characterized by frequent falls—recognized she might have a health condition and helped her mother pay to take her to see her child’s doctor. “He told my mom that the convulsions I was having was epilepsy and that I wasn’t mentally ill and needed to be on medication to stop the seizures.” 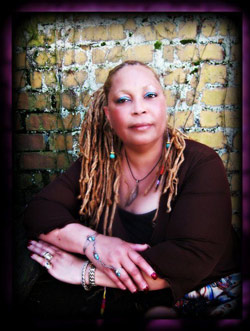 Phipps’s doctors believe her severe seizures were caused by DDT poisoning when she was an infant. While Phipps’s mother was pregnant with her and worked as a sharecropper in the 1950s, she was exposed to high levels of the toxic chemical—used to spray crops.

Initially, doctors placed Phipps on a ketogenic diet to address her condition. Ketogenic diets are one of the oldest epilepsy treatments. The special high-fat, low-carb, low-protein diet is typically prescribed for children diagnosed with epilepsy. Ketogenic diets kick the body into a fat-burning state that creates by-products called ketones. In turn, epileptic seizure episodes are often lessened or disappear when ketones are present. (To work, the diet must be strictly followed.)

The diet helped, but Phipps was also placed on medication. Doctors prescribed phenobarbital, a barbiturate used to treat or prevent seizures. After about three to four years, though, the drugs caused her to become sluggish and sleepy and prone to additional problems. “I began having stomach issues around 12 or 13,” Phipps says. “Plus, I continued to have balance problems from dizziness.”

Despite her difficulties, however, Phipps went to great lengths to be like her peers. “I spent a lot of energy trying to keep people from knowing that I had epilepsy,” she says. “The condition was an oddity, and there were still lots of people who didn’t understand [what I had]. I had teachers who didn’t want me in the classroom because they felt like I was a liability, and my mother had to go to court to advocate for me not to be put in an alternative school. I went through a lot of that because epilepsy was mistaken for a mental illness.”

But even at home, Phipps often faced a lack of understanding. “Some members of my family still didn’t get it,” she says. “They would say I had spells, so I think my mother was still a little overprotective at that point because she was afraid.”

And adding to her problems, says Phipps, was having to fight to participate in school activities she loved, such as being on the cheering squad. “It was like [it took] an act of Congress to do anything,” she recalls. “It was really rough because I found myself having to go before a judge just to be on the cheerleading squad. I had to go to court, so I did.”

Phipps made the best of her situation for most of her adult life. But things changed dramatically in 2003 when one of her doctors, Carlos Williams, MD, a neurologist at Commonwealth Neuro Specialists in South Hill, Virginia, suggested she consider a treatment called vagus nerve stimulation (VNS) therapy. 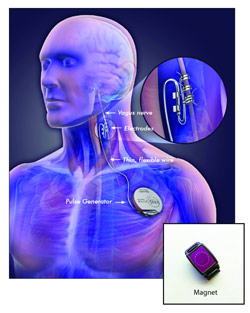 VNS therapy, which was approved in the United States for epilepsy treatment in 1997 (and for depression in 2005), consists of an implanted pacemaker-like computer device that delivers mild, intermittently pulsed signals to the patient’s left vagus nerve, activating various areas of the brain. The device is roughly the size of a small pocket watch and weighs less than one ounce and is implanted in the patient’s left chest area. From the device, a thin thread-like wire runs under the skin and is attached to the left vagus nerve in the neck. The implant procedure typically takes one to two hours.

“The device sends signals with a predetermined frequency with the intent to prevent seizures,” Williams says. In addition, a wristwatch-like little external magnet can be used by the patient or family members when a seizure threatens. “In some cases, a family would see a patient have a seizure and use the magnet to trigger the VNS, and that shortens the duration of the seizure,” he adds.  (If used properly, the magnet works most of the time.)

“I can swipe the magnet across my chest where the device is,” Phipps explains. “This causes the magnet to stimulate the biggest nerve on the left that shuts off that part of the brain where seizures happen, so this stops the seizure.”

Phipps decided to try VNS therapy because she was on four medications and still experienced seizures. Initially, she was nervous about where doctors would implant the device. That’s because when she was 11, she got rheumatic fever and had to get a pacemaker. Phipps’s pacemaker was on the right side of her chest, so docs placed the VNS device on her left.

“When I got this device, I was seizure-free for the first time in 10 or 11 years,” Phipps says. She was especially happy because by that time she had amassed a number of other epilepsy-related problems, such as a head injury, and weakness that put her in a wheelchair. (Epileptic seizures are different for everyone, and seizures that happen to someone affected who is either on or off their prescribed medications vary in frequency and symptoms.)

But despite her health problems, Phipps summoned up enough energy to teach kids with behavioral problems and learning disabilities. She used her health issues to show them it’s possible to overcome many negative circumstances in life. “Nobody wanted to deal with these kids,” Phipps says. “I was able to be an example to them.”

What’s more, Phipps used her epilepsy to teach her son at a young age how to handle a difficult, possibly life-threatening situation—what to do if a seizure attacked her. “I always say that he’s my biggest advocate because when he was 7 or 8 he knew that if I had a back-to-back seizure, or if I didn’t respond after a certain time, he should call 911,” Phipps recalls. “Some of the health care professionals in the area told me he was better prepared than the emergency medical technicians. Then, I was also able to give him the magnet all those years later so he could help me [when I had a seizure].”

Today, Phipps lives alone. Her son is grown and lives in Philadelphia, and her four adult stepchildren live in Florida and California. “I like to think that I would get married one day, and now that I’m out of the wheelchair and able to walk a little bit on four-arm crutches, I see myself as empowered and think I have a lot to offer,” Phipps says. “But it’s hard for people to get around [my epilepsy] sometimes.”

Still, Phipps remains upbeat and excited about her work as an epilepsy patient educator. “I think people still don’t understand what epilepsy is, and the vagus nerve stimulator as a treatment option sometimes doesn’t get mentioned,” she says.

Phipps wants people to know that you don’t have to go to a huge, well-known hospital to get the device. “People don’t know what’s out there,” Phipps says, “so I appreciate the opportunity to educate others about this device as an option. Even though it doesn’t cure my epilepsy, it gives me more power over my condition. I’m just on one medication and can see [life] clearly now.”