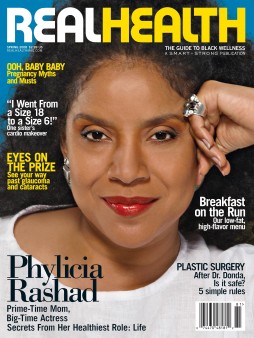 Role of a Lifetime

In the ’80s, Cosby Show mom Phylicia Rashad was a TV icon. She became a Broadway icon—the first black performer to win a Tony Award for best actress, in A Raisin in the Sun, with Sean Combs. Here Rashad, storming Broadway again in Cat on a Hot Tin Roof, with Terrence Howard, shares her favorite role: simple, healthy living.

She won millions of hearts as the tough but lovable mom Clair Huxtable on the groundbreaking ’80s TV series The Cosby Show. Playing a successful attorney and perfect mother of five, Phylicia Rashad was as smart as she was beautiful, equal parts sergeant and softy. She was also a pivotal role model depicting strength, poise and confidence—with a black woman’s backbone and style—to many upwardly aspiring black women.

Years later, the actress—who in her maternal TV role helped raise a legion of viewers and fans, guiding them through everything from their first day of school to their first date—still finds herself doling out advice. But if you think Rashad is out there scolding folks for not making their beds or taking out the garbage, you’re in for a surprise. Instead, she’s leading by example—living proof that if you take good care of your health, your “second act” in life can be as good as your first.

Her own second act has won rave reviews. In 2004, Rashad became the first black woman to win Broadway’s Tony Award for best actress. Now she’s back on Broadway in an African-American revival of Cat on a Hot Tin Roof. It costars Terrence Howard and James Earl Jones and is directed by Rashad’s sister, famed choreographer Debbie Allen.

“I think [my secret] is that I pay attention to what’s going on in the inside,” says Rashad of her enduring beauty and health. She will turn 60 in June and has never had a major health scare. “I like to rise early in the morning and sit quietly and allow my mind to be still and free of thoughts,” she says. “I like to go out sometimes in my yard in the evening and just listen to the silence of the night. Silence is a great healer for many things.”

Silence is not something Rashad gets to enjoy that often. When she’s not receiving standing ovations onstage or on the road promoting upcoming projects, she’s working overtime as a spokeswoman for the national Peripheral Artery Disease (PAD) Coalition. PAD is a chronic condition that develops when fat-clogged arteries cause poor circulation in the arms or legs, increasing one’s risk of heart attack and stroke. Today, Rashad can count eight family members who died of weight-related illnesses—including her father and grandfather, who, while they were alive, complained of symptoms that may have been related to PAD. (To learn more about PAD, see sidebar.)

A Mother’s Discipline
The discipline she developed early in life toward diet and exercise keep Rashad sane while she stays busy.

“I eat healthily,” says the Houston native. “Lots of fish and vegetables. I don’t stuff myself or pile my plate. Everything in moderation.”

“Also, I don’t drink. I don’t smoke, and I exercise a few times a week,” she says. “It’s just a lifestyle choice. [When I was a teenager] I was a majorette. It was all about marching hard and raising our knees to our chests. For the longest I had no idea [what health benefits] I had gained from this, but I was in good shape. Now I just walk a lot but I make it intense. I also enjoy the recumbent bike and meditation.”

Rashad credits sidestepping obesity and other weight-related ailments to the guidance she received from her family early on—principles she’s worked to pass down to her own kids.

“I grew up eating organic food,” she says. “Food that was grown on my grandparents’ farm. I grew up in a time where food was not chemically engineered like it is today. [I think it’s important] for people to return to good, fresh healthy foods.”

Part of that, Rashad says, is cutting out junk food and limiting the amount of meat you eat. While the relationship between high-calorie, low-nutrient foods and poor health is clear, many experts also believe that Americans’ high consumption of meat contributes to clogged arteries and heart disease.

“I don’t eat red meat,” she says. “Actually, I stopped eating meat altogether about 15 years ago. Some bodies don’t need any animal proteins, and truthfully, I do have the blood type that leans toward vegetarianism. But because I do so much running around, and I don’t get enough sleep or protein, I started eating fish [to compensate].”

When you think about it, says the actress, self-care isn’t exactly rocket science. Sure, there are temptations (hers is a good chocolate cake) and other health challenges (hers is adrenal exhaustion), but if you persevere, you win. In the end, she warns, you are what you eat and the lifestyle you live. Now is the perfect time to turn it all around—not only for yourselves but your children.

“If you tell children [the right way to live] while they’re young, the information seeps in,” she says. “Then they’re on the road to good health for life.”

Tomika Anderson is a freelance writer based in Brooklyn. Her work has appeared in Essence, Time Out New York, Entertainment Weekly and Ebony magazines.

Peripheral Artery Disease (PAD)
How Phylicia Rashad sidestepped a family history of this life-threatening circulatory condition—and how you can, too


“My family members, like millions of other people, simply were not aware of peripheral artery disease [PAD] and the risks associated with it,” says Phylicia Rashad. A chronic circulation problem affecting 8 million to 12 million Americans, PAD occurs when arteries serving the body’s extremities become partially clogged with fat (atherosclerosis) and leave limbs starved for blood. Rashad says that eight deceased relatives complained of PAD symptoms when they were alive; all had weight-related illnesses and one or more of the common risk factors: diabetes, high blood pressure and high cholesterol.

As with many obesity-related illnesses, PAD hits black folks particularly hard. “African Americans are two and a half times more likely than whites to have PAD,” says Emile Mohler, MD, a cardiovascular-disease and vascular-medicine specialist at the University of Pennsylvania. “This is even after controlling hypertension, diabetes and other things.”

But there’s hope, says Rashad, who has been tested for PAD and is negative. “If it’s about lowering your cholesterol, that’s what you do,” she says. “If it’s about giving up cigarettes, that’s what you do. It’s about treating your body with respect.”
The Basics
What it is: A chronic illness causing poor circulation, most often in the legs.
What it means: Arteries, including those that travel to the heart and the brain, may be blocked, increasing the risk of a heart attack or stroke.
Warning signs: Pain, heaviness or cramping in the legs or arms, usually triggered by activity, including walking, that disappears after resting for a few minutes. In more severe cases, discomfort can occur while lying down. Though the pain location varies, calf pain is most common. Other symptoms include cold legs or feet, change in leg skin color, hair loss on legs and feet, sores on legs
or feet that don’t heal, changes in nails. Some people experience no symptoms.Who’s at risk: People over age 50; smokers or former smokers; folks with diabetes, high blood pressure and high cholesterol; those with a family history of heart attack or stroke.
How to prevent it: Eating a diet low in saturated fat, trans fat and cholesterol; exercising, especially walking.