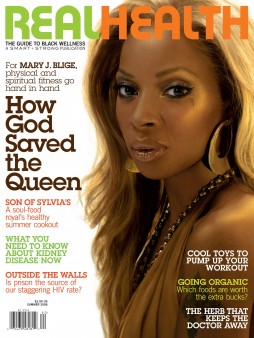 Mary J. Steps It Up

Riding the success of The Breakthrough, her fastest-selling album to date, Mary J. Blige is stronger, healthier and happier than ever. Here’s how the queen of hip-hop soul turned her life around.

Soul siren Mary J. Blige is a sista under construction. You can’t see the scaffolding around her svelte frame, but it’s there. It’s just invisible—kinda like the pain of old wounds. Scared straight by the death of her friend the singer Aaliyah in a plane crash five years ago and the attacks on the World Trade Center soon thereafter, Mary turned to God. He exposed her demons. He gave her the strength to kick her notorious drug habit to the curb. But just as Rome wasn’t built in a day, the 35-year-old icon realized that it’s not until after you’re sober that the real work begins.

“I was the most miserable, messed-up person. I was harboring a lot of resentment toward people because I was hurt,” Mary admits, referring to the molestation she suffered at the hands of an uncle when she was 5. “Finally, I had to decide: Was I going to hold on to the hurt for the rest of my life and damn near die? Or was I going to make the decision to forgive people and move on?”

Tired of living life under a stormy cloud, for once the decision was a no-brainer. Ripe for an emotional overhaul, Mary strapped on her spiritual Kevlar and got ready to go to war. Guided by the Holy Spirit, she cracked the book of Proverbs; what she found there literally changed her life. “Through his word, God showed me that I was prideful, that I was stubborn,” she says quietly. “I came to a crossroads. Either I could go on living like I was—depressed and full of self-doubt—or I could turn my life around. I decided to make a change.”

Enough Cryin’
“A change” is an understatement. Mary tackled her problems like a woman possessed. The first stop on her makeover marathon? UCLA’s fitness center. “Two years ago, I went to LA and lived there for about a year,” she recalls. “I got really frustrated because it seemed like every girl who came around the corner was in perfect shape.” The last straw came when the R&B diva went to a department store to try on a pair of jeans in her size—and they didn’t fit. “I just wasn’t healthy,” she says.

Now be clear—for years Mary has rocked the kind of figure that has made other sistas jealous and brothers smile. A few years ago, she stunned the music industry when she appeared super slim on the cover of her 2003 album, Love & Life. But maintaining her new lean shape had proved to be a bit of a challenge for the pop star. So a week after the jean debacle, Mary enlisted the help of celebrity fitness trainer Gunnar Peterson.

“Even if she was ‘out of shape’ [before working with me], her ‘out of shape’ is still beautiful,” says Peterson. “Still, she put in a lot of hard work. We did sprinting, a lot of strength training and peripheral hard action—which is upper-body/lower-body alternating circuits. The key to her workout was that when she started, she never stopped. She’d be moving every moment she was in the gym. It wouldn’t be about her doing a set and then us taking a break to talk about her latest album. Or doing a set and then stopping to let me admire her manicure. It was go, go, go all the time. She was transforming in front of my eyes. It was great.”

Drastically reducing the carbs, Mary traded her favorite Italian foods for a strict diet of mostly protein and green vegetables. “I was doing egg whites with oatmeal in the morning, and for lunch I was eating a big green salad that had steak and onions cut up in it. I ate that every single day. At night, I would have chicken or fish since that’s the last meal of the day.”

Making sure she always ate “light at night” and drank at least a gallon of water a day, it took just a few short weeks for Mary to begin seeing a major difference. Switching up her cardio with a little strength training, she pounded her triceps, quads and back with 30-pound dumbbells. “I didn’t start by lifting 30 pounds,” she emphasizes. “I worked my way up to them.” Now, the R&B star is proud to report that she can bench-press 125 pounds—more than some guys she knows.
Real Love
The singer’s newfound body confidence gave her the strength to make some other important changes in her life. Party-obsessed friends who couldn’t accept Mary’s new-and-improved lifestyle faced the chopping block. “When you’re training—just like in any other sport—you need your rest,” she says. “I just couldn’t hang out like I used to. And I definitely couldn’t drink like I used to. A lot of people couldn’t deal with the new Mary, so I had to let them go. Some people left on their own. They were my friends, but unfortunately, when you want to do better for yourself people are gonna desert you. I haven’t seen them in a while, but that’s cool. I’m just gonna keep it moving.”

One friendship Mary has learned to lean on during her period of self-evaluation and renewal is the one with her husband, Kendu Isaacs.

“Whenever I get in one of my moods and start to spiral downward, Kendu puts God right there in my face,” she says. “In those moments, he doesn’t play around with me. He’s very stern. He reminds me to get out of my own way so that God can bless me. If I were him, I would have left me by now because I’m crazy! But he has the patience. Sometimes I think, ‘Wow,’ is that what you’re here for—to show me God’s love?”

To help strengthen their relationship, the newlyweds seek guidance from their close personal friend, televangelist Frederick K.C. Price of the Crenshaw Christian Center in LA. “He’s like my father,” says Mary. “That’s my spiritual dad. He’s helped me through a lot, helped me see a lot. Then I have other [TV pastors] that I watch every morning—Joyce Meyer, Creflo Dollar—they’re all aiding me in my spiritual development.”

Price says he cautioned Mary on the need to have something substantial to sustain her through the ups and downs of a fickle industry.

“When Mary and I first met and I talked with her, I got a read on her from a spiritual perspective,” says Price. “There has been a dramatic change in Mary from the time that I first met her. She’s in a wild business, and she’s at the top of her game; but anything can happen, and then somebody else can be on top. I gave her some pointers that I think work, and she’s grasped on to them. She’s not playing, and that’s what I really like about her. She’s for real. I think she’s doing great. Building a strong spiritual base is the foundation for everything in life.”

While she admits that it’s difficult not to let her demons out of the closet, Mary challenges herself to remain optimistic. “It’s an everyday struggle,” she says. “I am constantly fighting Satan with the word of God. I still get pissed off. I still want to have bloody thoughts about people—wanting to stab them and kill them,” she adds, laughing. “But God said he would fix my mind, to help me think more positively—and I believe him.”

MJB da MVP
It’s officially a new day in Mary’s life. She’s preparing to embark on a world tour later this summer. In addition, she’s taking acting classes in anticipation of her starring role in MTV Films’ upcoming biopic on the legendary Nina Simone. “I am so nervous!” she admits. “It’s a big honor to have been chosen, but this is the first big role I’ve ever had. I’m going to give it all that I have.”

HEALTHY FRAME OF MIND
Just how strong is the mind-body connection?

Ever notice how much better and healthier you feel on a sunny day? It may not be a coincidence.

“Anything that affects the mind and emotional well-being of a person is going to affect [how] they feel [physically],” says Harold G. Koenig, MD, a professor of psychiatry and behavioral sciences at Duke University. “An optimistic outlook plays a powerful role on health.”

But can having a healthy frame of mind actually lower your risk for serious illnesses? It might, according to Dr. Koenig. This is because thinking positively can reduce your stress level, a factor that plays a key role in many diseases that disproportionately affect African Americans. For example, stress increases blood pressure, which puts us at risk for stroke, heart attack or kidney failure.

If a person can lessen this stress, he or she may lower their blood pressure. Dr. Koenig says that stress levels are often reduced by religious faith, as people find meaning and purpose in their lives and social support that they know they can depend on. “When people are isolated, they perceive their [problems] as being much worse,” he says. “Having a supportive group that’s praying for you can affect [those] perceptions.”

The task of strengthening your mind-body connection is an ongoing process. In addition to prayer, here are a few tried-and-true approaches:

Meditation
There are countless ways to practice this highly individualized form of personal reflection. Start by sitting in a quiet room and focusing on breathing. To fully clear your mind, put your phone on silent, shut down your computer and block out any other potential distractions.

Journaling
Write your stress away. Journaling has been shown to have a positive effect in sorting through and dealing with our sometimes conflicting emotions. Keep a journal by your bed to vent the day’s frustrations (and record the highlights!) before you go to sleep each night.

Yoga
The term “yoga,” which loosely translated means “union,” allows you
to connect your mind and body through a series of postures, called asanas. Try an at-home yoga tape like A.M. and P.M. Yoga for Beginners (www.amazon.com; $19.95) for tips and demonstrations.