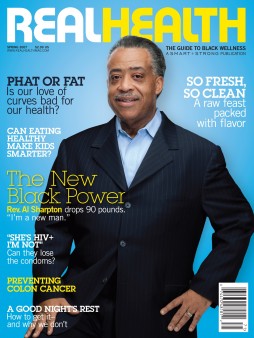 After years of struggling with his weight, activist Al Sharpton leads the way to fitness.

He may not have a washboard stomach or the pecs of an Adonis, but don’t be fooled—the Reverend Al Sharpton has spent many hours fine-tuning his physique. Having shed nearly 90 pounds and having maintained that weight loss over the past few years, America’s most visible civil rights leader is in fighting form for the first time ever.

Overhauling a fatty diet while breaking in his walking shoes six years ago—dropping down from about 300 pounds to a svelte 210—Sharpton has finally conquered a struggle with weight that has plagued him his entire life. “I have more endurance; my focus is sharper; and I don’t need as much sleep as I used to,” the political activist boasts cheerfully. “I can honestly say I’m a new man.”

Sharpton’s dramatic body transformation couldn’t have come at a better time. At 52 years old, the father of two was getting daily reminders that his health was beginning to slip. A Pentecostal minister, he would get winded easily during sermons. He began to suffer from aches and pains while engaged in moderate activity. And Sharpton’s family history of diabetes, not to mention his personal struggle with “sugar,” threatened to permanently derail his longtime love affair with fried chicken and chocolate chip cookies.

So when the onetime presidential candidate famously lost over 30 pounds in 2001 after giving up solid foods (while in jail for 90 days for a protest in Vieques, Puerto Rico), he vowed to do whatever it took to maintain his new figure. Not to mention his health.

“Before Vieques, my diet was out of control,” says the syndicated radio host and star of the TV show Sharp Talk with Al Sharpton on the set of his photo shoot. “I ate whatever I wanted, whenever I wanted. I didn’t exercise. But when I stopped eating badly, the weight came off. And since I had 90 days of not having to do anything else, I spent much of that time walking around the pier. Eventually, exercising became a lifestyle.”

Not that he hasn’t struggled with his weight since then.

When Sharpton campaigned for president in 2004, the stress he was under—not to mention the rich food he ate at mandatory receptions and black-tie events—caused the weight to creep back.

“I went up because [when you’re running for public office] you go from a lunch to a dinner to a brunch. I think I gained about 45 pounds. But it bothered me. For the first time in my life, it bothered me. So I would constantly start exercising, and immediately when I stopped running [for president], I dropped it all down. Unlike in my younger days, I became very weight-conscious and knew how much better I felt being leaner.”

Once Sharpton strengthened his commitment, he hit his stride, and the temptation to return to his old ways fell away. Now, he says, he tests his willpower by dining out with friends who are eating his favorite foods.

“I think I’ve always had discipline. I just never applied it to eating,” he says, laughing. “When I was in Vieques, a guy told me that if you can control the way you eat, you can control your life,” he says. “I’ve never forgotten that lesson.”

And he’s encouraging others to follow his lead. In January, Sharpton launched a 60-day diet program on his talk-radio show, Keepin’ It Real, heard in more than 40 markets across the country. Assisted by resident doctor Yael Varnado, he used the lure of winning a “healthy” dinner date with him, as well as an assortment of other prizes, to encourage his listeners to drop the extra pounds so that they could live longer lives.

His health-conscious lifestyle has rubbed off on his family and friends as well. “The people in his studio, his producer, they’re watching their diets now,” says his daughter, Dominique Sharpton. “Everybody is trying to live, and he’s been a great motivator. I’m very proud of him.”

“Black people, you can’t have all this focus and determination in every other aspect of your life and then turn around and eat too much,” he warns. “It means something’s off. It means you’ve still got some work to do. God wants us to be in control.”

To be clear, Sharpton insists that you don’t have to go hardcore—like adopting the liquid diet he was on when he was jailed for the Vieques protest—in order to lose the weight.

“I just eat healthy,” he says. “I eat a chicken Caesar salad every day. It’s all about lean meats, water, fruits and vegetables. And [I eat] soups, especially chicken noodle or tomato-based soups. I’ve found things that I actually like to eat, so I don’t miss the old stuff as much.”

And when he’s on the road—which is most of the time—Sharpton chooses his hotel, in part, according to how good its fitness center is. “I work out first thing in the morning, before I even read the paper,” says the self-described news junkie. “It’s 30 minutes on the treadmill while I’m watching the news or listening to some music [and] 15 minutes on the elliptical trainer. Then, I’ll play around with some weights—I might even hit the track afterward.”

And even though Sharpton’s resolve now is primarily to maintain good health, he’s found that his trimmer waistline is a hit with the ladies. Talk about motivation.


“It’s never been my focus,” he grins sheepishly, “but it helps.”