A software engineer from Buckingham, England, was sentenced to 26 weeks in jail for harassing men with sexually explicit messages, emailing their wives and falsely claiming one man had HIV, The Telegraph reports. Jeevani Wickramaratna, 44, became infatuated with her coworker Paul Stokes and sent him emails and Facebook messages claiming he was having an affair with her, the self-proclaimed office “cougar” (slang for an older woman who pursues younger men). She also sent messages alleging Stokes had been diagnosed with HIV. Stokes denied having an affair with Wickramaratna, and he reported her to the police. She was also accused of allegedly sending abusive emails to Kazeem Benzair, owner of communications firm Wimax, and his colleague Pir Khan. Wickramaratna pleaded not guilty to three allegations of harassment, but she was convicted of all counts after a trial. 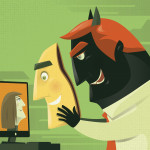