The Race Is On

When not training for more Olympic gold, celebrated swimmer Cullen Jones is on a mission to make more black kids aware of water safety and the importance of knowing how to swim. 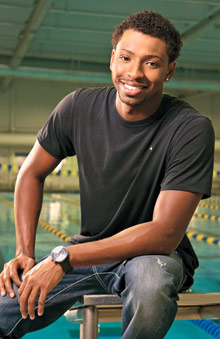 At the age of 5, Cullen Jones almost drowned. Had his death not been averted, it would have made him a statistic that’s not uncommon among minority kids. Why? Because black children drown at a rate almost three times that of other groups—and nearly 60 percent of African-American children can’t swim, according to a 2008 USA Swimming Foundation study about what stops many minority kids from diving into this water activity.

For those unfamiliar with Jones’s near-death experience, picture this: Jones is an excited 5-year-old on a family vacation at a Pennsylvania water park. He shoots down a water slide and somehow loses the protection of his inner tube at the end of the ride. He’s swallowed by the water, passes out and needs mouth-to-mouth resuscitation to revive him.

Today, at age 26, Jones is a statistic of a different type, one that’s rare among any group: He’s an Olympic gold-medal swimmer. And as a member of the USA Swimming Foundation’s Make a Splash campaign, he helps educate minority kids about water safety and motivate them to add swimming to their life skills repertoire.

But he’s never forgotten how it felt to almost drown. “It’s definitely a sense of helplessness,” Jones recalls. “At that point, I just didn’t know exactly what to do to get air. It’s very constricting. You feel like the world is closing up on you. I was trying as hard as I could to get to the top of the water and get air, but I couldn’t.”

But wait. This is where Jones’s future success story starts. His mom responded to the incident with the cool logic of a precision swimmer correcting a stroking error. “She signed me up for swimming lessons,” Jones says.

At that early age, the fearless life lesson Jones learned from his mother was about attacking your fears and learning how to swim, but it also transcended the years to motivate and support his entry into the water as an elite Olympic athlete.

“She wanted me to reach for the stars and have everything that I’ve ever wanted,” Jones says. “But my mom really taught me to think outside the box to a certain extent.”

Although his mother is afraid of the water, and despite the scary incident, she never transferred that fear to Jones. “Rather than shield me from it, she wanted to give me the tools to venture down that path—and it turned out to be my career,” he says. “Right after that event, my mom used to give me action figures and tell me to go take a bath. I’d be in the tub playing with my toys. I always equated being in the water with having fun.”

In fact, he has always been drawn to the water and the pool. “It comes naturally to me,” he says. “Even now, when I’m upset, I’ll go to swim practice and get my aggression out by swimming.”

But many blacks are decidedly uncomfortable in the water because they lack swimming skills, study findings show. Jones wants that to change.

For this to happen, Jones stresses, parents should help their children learn how to swim, even the mom and dads who have a water phobia. “Wouldn’t you want to give your children the opportunity to learn a life-saving skill and overcome their fear of swimming?” he asks.

Parents who are afraid to have their children test the water, Jones feels, face a double-dipped helping of anxiety. First, because they fear the water. Then there is an additional concern: that they would be unable to help their children if they were in danger of drowning.

One basic way to overcome this is to take swimming lessons. Jones advises families to find an instructor with whom they’re comfortable.

“Different people learn in many different ways,” he says. “It’s really all about understanding how you learn and finding a teacher who works for you.”

Jones says his challenge was to find an instructor who was funny, who made him laugh and made the sport fun for him. “Also, it’s important to find a place where you’re comfortable training.”

Besides its importance as a life-saving skill, swimming provides proven health benefits. Water-based exercise is a great way to get fit and conquer a number of health problems, according to the Centers for Disease Control and Prevention (CDC).

In fact, the sport’s health benefits include decreasing the risk of chronic illnesses, such as diabetes and heart disease. Plus, it’s also a great aerobic exercise for weight watchers.

And for people afflicted with various arthritic conditions, it can improve the use of the affected joints without aggravating symptoms, the CDC says. This is because the water’s buoyancy greatly reduces the pressure on their stiffened joints, which allows for easy movement, exercise and even relaxation without injury-inducing impact on the body.

And did you know that swimming is an activity even asthma sufferers can do? As long as they take their medicine that is. (And, yes, even Olympic athletes—no, not Jones—have asthma.)

In addition, swimming can also boost mental health by enhancing mood and decreasing depression, according to the CDC, and it can improve familial connections between developmentally disabled children and their parents.

These physical and mental health benefits, however, must be balanced against taking certain precautions when in the water.

Jones tells parents that it’s critical their children learn basic water safety rules before they sign up for lessons in a structured swim class. Some common-sense tips include:

In between his work urging kids and parents to get involved in swimming, Jones has been logging lots of hours in the pool training for the 2012 Summer Olympic Games.

Since his 2008 Olympic gold medal win in Beijing, Jones reaped a number of additional accolades courtesy of his rigorous daily pool practice sessions.

Last summer, he outpaced the old American record for the 50-meter freestyle race and set a new record at the 2009 U.S. nationals. Also, he got gold once more in another four-man, freestyle relay race at the world championships in Rome.

Now, besides the chance to claim another Olympic medal in London, what Jones finds fulfilling is the role model he’s become for black kids who might never have considered swimming. When he speaks with the youngsters, Jones likes to pass along his own personal mantra: Dare to be different.

“When I travel, I show kids the Olympic medal and tell them I got this because I dared to try something different,” he says.

“I have tons of friends who are basketball and football players,” Jones continues with a brief chuckle. “While growing up, they would look at me and say, ‘You still doing that swimming thing?’ Now when people look at me—a swimmer, and I have an Olympic gold medal—they say, ‘Keep it up! Keep it going!’”

And Cullen Jones, Olympic contender and dedicated swimming fan, is ever so pleased to comply.

As he notes: “I’m still in the pool every day.”