African-American children are less likely to be given antibiotics and also the most powerful of these bacteria killers to treat acute respiratory tract infections, but there’s more to it than meets the eye, according to a new study and reported by HealthDay.

In an effort to explore racial disparities in a pediatric primary care setting, researchers from Children’s Hospital of Philadelphia evaluated data from 25 primary care pediatric practices in Pennsylvania and New York. Scientists focused on 81,000 visits that ended with doctors writing the patient an antibiotic prescription.

Once researchers broke down the data by race, they found that almost 24 percent of visits by black children ended with an antibiotic prescription compared with 29 percent for non-black children. In addition, black children were about 12 percent less likely to receive broad-spectrum antibiotics.

Although on the surface this may seem as if docs are biased in not prescribing antibiotics to black kids as often as to non-black children, researchers suggested otherwise. “We hypothesize that this discrepancy reflects over-prescribing, both for all antibiotics and for the relative proportion of broad-spectrum antibiotics, to non-black patients, rather than under-prescribing to black patients.” said Jeffrey Gerber, MD, an attending physician at the hospital, and the study’s leader.

Other medical experts also agreed and added that although we’re fortunate to have antibiotics to help when they’re needed, doctors need to give a child’s body time to heal on its own. 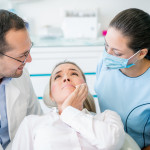 Antibiotics Aren’t Necessary for Most Toothaches