Raise awareness and fight stigma from the comfort of your couch.

December 1 has been designated as World AIDS Day since 1988, when it became the first global health day created by the World Health Organization. Each year, people around the world unite to raise awareness in the fight against HIV/AIDS and commemorate those we have lost.

If you’re looking for a World AIDS Day event in your area, check out the POZ Calendar or check with your local AIDS service organization. But there’s also plenty you can do without even leaving your house. Here are some suggestions for observing #WAD2016 online. 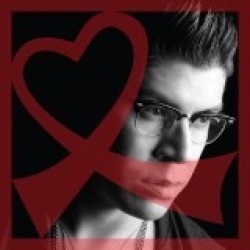 1. Raise awareness and commemorate World AIDS Day 2016 with a special Facebook profile photo filter created by fashion designer and HIV advocate Mondo Guerra. The Facebook filter is courtesy of the “I Design” campaign by Merck, which aims to empower those in the HIV community to have open and honest conversations with their health care providers. 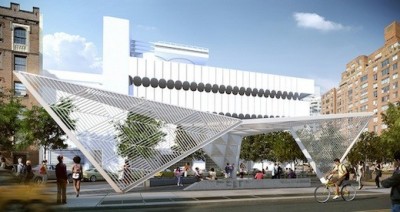 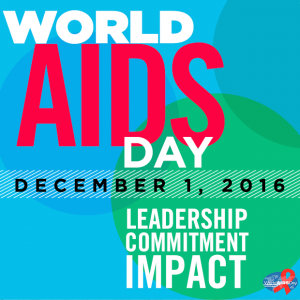 3. Spread the word on Facebook, Twitter or Instagram. Visit AIDS.gov to download graphics, posters and images plus find HIV/AIDS stats and other helpful WAD resources. Be sure to use #WAD2016 or #WorldAIDSDay in your posts and tweets. 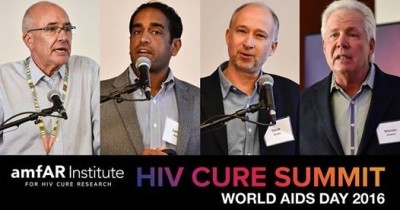 4. Live stream the 2016 HIV Cure Summit sponsored by amfAR, The Foundation for AIDS Research at 4 p.m. EST on Facebook. This community event is being held at UCSF Mission Bay Conference Center in San Francisco and will include an update on progress toward an HIV cure by leading researchers from the amfAR Institute for HIV Cure Research. 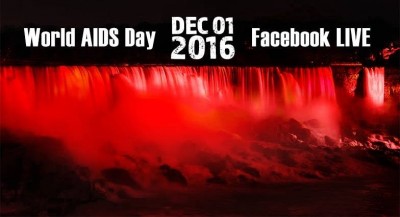 5. Join Rise Up To HIV for its Facebook Live broadcast from Niagara Falls (the Canadian side) from 9:45 p.m. to 10:15 p.m. EST. The Falls will be lit red for 15 minutes in commemoration. You’re invited to tune in, leave comments, reflections, memories and prayers as well as positive messages of love, encouragement, inspiration and hope. 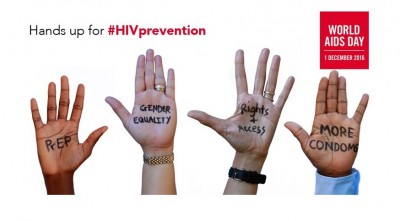 6. Put your “Hands Up for #HIVPrevention.” UNAIDS is asking people around the world to submit a photograph of a word or short phrase written on the palm of one of their hands summarizing what we need to do to strengthen HIV prevention efforts, for example more condoms, empowerment, inclusion, pre-exposure prophylaxis (PrEP) and rights for women and girls. Post the photo on the UNAIDS Facebook page and share it on social media to spread the word. 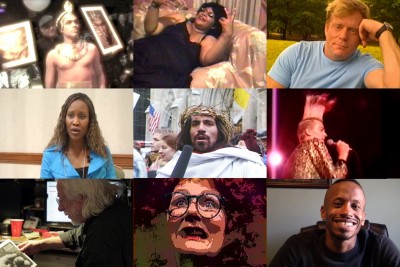 7. Watch Compulsive Practice on Vimeo. Curated by Jean Carlomusto, Alexandra Juhasz and Hugh Ryan for Visual AIDS, Compulsive Practice is an hourlong video compilation of compulsive, daily and habitual practices by nine artists and activists who live with their cameras as one way to manage, reflect upon and change how they are deeply affected by HIV/AIDS. Participating video makers and artists include James Wentzy, Nelson Sullivan (1948–1989), Ray Navarro (1964–1990), Carol Leigh a.k.a. Scarlot Harlot, Juanita Mohammed, Luna Luis Ortiz, Mark S. King, Justin B. Terry-Smith, and the Southern AIDS Living Quilt. (Video will be available on December 1.) 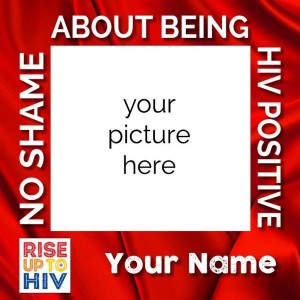 8. Fight stigma by updating your profile photo with this frame from Rise Up To HIV. If you would like your photo in the 2017 No Shame About Being HIV-Positive frame, send a Facebook message to RiseUpToHIV with a picture you would like to use, or e-mail a picture to riseuptohiv@gmail.com. Your framed photo will be sent to you within 48 hours—so act fast! 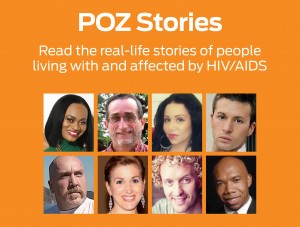 9. Share your story on POZ.com. Together, our stories can change the way the world sees HIV/AIDS. When people living with and impacted by HIV/AIDS share their tales of how they personally overcome the hurdles of HIV, it inspires others battling HIV and breaks down the shame, silence and stigma surrounding the disease. The stories of our friends, families, lovers, neighbors, doctors, social workers and peers everywhere also show others that they can get involved in the fight against AIDS. So whether you’re HIV positive or HIV negative, POZ wants to hear how you are standing up to HIV in your life. Selected entries will be published online and in print!

Tell POZ what you’re doing for World AIDS Day or whom you’re remembering in the comments below!