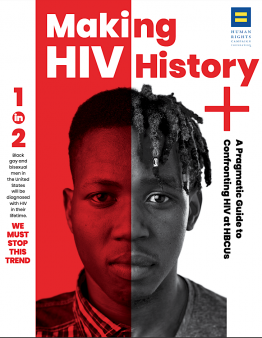 The cover of the free guidebook for historically black colleges and universities. Courtesy of HRC Foundation

4 Ways to Confront HIV at Historically Black Colleges and Universities

One in two gay and bisexual Black men in the United States will be diagnosed with HIV during their lives. The Human Rights Campaign (HRC), an LGBT advocacy group, wants to stop that statistic in its tracks.

The HRC Foundation, an arm of HRC that deals with LGBT-inclusive policies and practices, published a new guidebook on HIV prevention, awareness and care aimed specifically at administrators, students and staff at historically Black colleges and universities (HBCUs). Titled Making History + A Pragmatic Guide to Confronting HIV at Historically Black Colleges and Universities, the book can be downloaded for free here.

“In the fight to end HIV and AIDS, we must ensure our work touches every college and university campus—and especially those primarily serving Black college-aged students, who are disproportionately impacted by the epidemic,” said Leslie Hall, associate director of the HRC Foundation’s HBCU program, in an HRC press release. “This new guide, shared last week with HBCU leaders, will help these institutions provide equitable treatment, expand access to care and offer educational resources for people living with HIV and LGBTQ students.”

Although HIV infection rates are declining overall in the United States, young people, especially youth in the Black community, are disproportionately affected by the disease. What’s more, the HRC press release points to other data from the Centers for Disease Control that show 51 percent of youth don’t know their status.

“In 2015, youth and young adults ages 13 to 24 represented more than one in five new HIV diagnoses in America,” the release states. “Eighty percent of those diagnoses occurred in people ages 20 to 24. Among youth diagnosed with HIV in 2015, 55 percent were gay or bisexual Black men.”

How does the guidebook propose addressing this challenge? It lays out four ways leaders and students can confront HIV on campus: